I do not remember ever seeing leaves fall in autumn... 'till I came this semester to England. When I was four or five years old, living in Russia, I vaguely recall strolling in the forest with my mother, collecting the red and golden maple-tree leaves into colorful bouquets -- but I don't remember ever observing the actual process of the falling of leaves. The rustling of the wind; the peaceful float of the leaf through the air; the tapping noise as the leaf strikes a branch, where it's still-attached brethren await their flight; the gentle landing of the adventurous leaf onto the moist ground... all this has gone absurdly unnoticed by my supposedly outdoorsy and contemplatory self. And yet, how could such a wonder have escaped me? 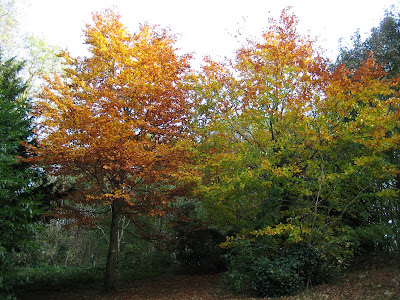 I had known of the season called "autumn". I suppose that its synonym, "fall", should have sufficed as a clue. I knew, too, that in summer, leaves are green, plentiful, swaying high in the branches of trees; and that, by winter, hardly a browned leaf remains on the suddenly-barren branches, while, below, countless leaves lie crunching beneath my feet as I walk through the forest. The Intermediate Value Theorem, Mathematical Induction, and probably a handful of other principles could all have told me that if the leaves were initially on branches and were later found on the ground, then surely there came a time when they were floating in between those two non-adjacent states. But somehow, I had never seen this process in action.

Indeed, until now, I've never had a good chance to observe falling leaves. In Israel, leaves don't fall: they wilt in the summer heat, barely hanging on to the branches, awaiting the rains of early November. In Alaska, the leaves don't so much fall, as freeze off, descending onto the ground enshrouded by thick mid-October snowfall. And in Evansville, away from the climate extremes of Israel and Alaska... well, the leaves probably fall in Evansville, but, alas!, in my previous semesters at college, I must have been too busy studying the mathematical principles mentioned above to take note of how those principles apply to nature...

But leaves fall in Harlaxton! They soar through the air, they twirl in the wind, they land on heaps of other yellowed and reddened leaves... They are a perfect companion to my cheerful, carefree, winged 13 credit hours; the sound of their rustling is but an echo to my exuberant singing! Yes, leaves do fall at Harlaxton! 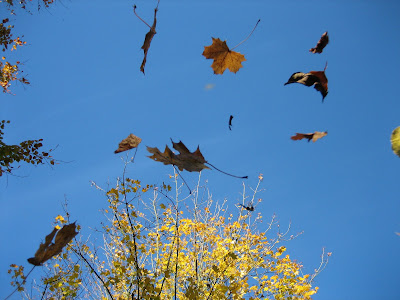 * * *
... Actually, to those who observe the flight of leaves -- and now I am fortunate enough to consider myself part of that exquisite group of free-spirited poets -- the word "fall" is a terrible misnomer. Autumn leaves don't fall: they may glide or slice through the air, they may soar or fly over treetops, or they may even dive recklessly onto the ground, but they definitely don't fall. Falling is passive: it implies the unintentional death of the fragile leaf. Yet the flight of the leaf is not involuntary, nor is its state frail!

Leaves are strong, healthy, and beautiful when they leave the tree. The people who think of autumn leaves as frail -- indeed, the same types of people who must have come up with the word "fall" to mean "autumn" -- must only have noticed the old and crunchy leaves on the ground, but not the leaves as they float through the air. Yes, leaves on the ground do turn frail within days, if not hours: their flights -- the leafs' most glorious moments -- drain them of their spark of life. But do not, dear reader, let the sight of dark lifeless coals expunge your memories of the liveliness of the fire, nor let the heap of dead leaves on the ground wipe out your memories of leaves magnificently soaring though the air!

-- (from Jack London, personal credo)
Leaves choose the opportunity of their one and only adventure. They hang onto their branches just long enough, withstanding wind and rain, until they're prepared to leave their long-time home. So much have they heard of the great World that exists beyond the scope of their tree; of creeks, and waterfalls, of flowers, of all sorts of creatures... even of things as common and magical as dew on the grass below them. The faint whisper of the butterflies, the singsong-y chirping of birds, and the gentle caressing of the wind have all told the leaves of the great Beyond that lies ahead of them. And now they're ready. They have waited long enough; they have donned their new colorful garments; they have quenched their thirst with sunlight. Some leaves have even sprouted little balls on their sides, to help them twirl in mid-air. Winged and colored like the butterflies that they had once so envied, the leaves are now ready to take flight.

So even in Harlaxton the leaves do not fall! They take a deep breath, drink one last drop of golden sap from the tree, and then they let go. The wind catches the adventurous leaves, and they soar blissfully through the air, beautiful, free, and unafraid. To these leaves, who had never left their branches before, time slows down while they glide through the air; so that, by the time that they have reached the soft ground below, a whole eternity seems to have passed for the leaves. And so, while a blanket of snow gradually piles upon them, and while spring creeks trickle and dance by them, and while summer shade falls over them, and even while new leaves take flight and land upon them, the leaves peacefully lay to rest, for a short eternity more, re-living their extraordinary journey in their bright dreams. 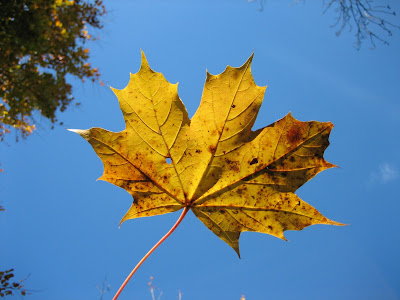 Labels: [All], Harlaxton Adventures, Thoughts / Poems, Travels, Update from the University of Evansville