Two weekends ago, in mid-March, we got out to the mountains with our snowshoes again.

The weather forecast bore gloomy rain predictions everywhere in our region, on both the rainy and sunny sides of the Cascade Mountains (Seattle and Leavenworth, respectively).  But in one corner of the map, Mt. Rainier promised partly-cloudy skies -- so we gathered our stuff and, in record speed (at least for us -- it still took a couple of hours), got into the car.

In an attempt to not get ourselves killed (it was the ides of March, after all!), Katrina and I tried out our new avalanche safety equipment.  I was a bit of a naysayer at first -- especially having seen the price tag -- but honestly, this stuff was really cool!  The kit consists of a transceiver (a.k.a, "beacon"), a super-lightweight probe (like a tent pole), and an equally lightweight foldable shovel.  The idea is that if you were -- knock on a tree -- to get caught in an avalanche, the transceiver will let your buddy easily find you by "homing in" with his transceiver onto yours.  Once at close range, the buddy will probe the snow -- sticking the 8' probe into the snow, until he/she finds the exact location -- and then use the shovel to dig you out.  For good chances of survival, the entire operation must be completed within 15 minutes (and for best chances, in the first 5 minutes) -- which is why having good equipment and especially the transceiver is so important.

Friend and family, rest assured we were in very minuscule danger (the avalanche forecast for that day was low, and the area we were in is actually known for being a good "beginner" spot).  But -- practice makes perfect, and having the beacons (and turning them on and off as needed) did remind us to keep mindful of our surroundings.  It also made me feel totally "pro" (well, until we saw some muscular dudes with big backpacks, ice axes, ropes, and etc. walk up the mountain on downhill skis, heading for an overnight trip to some remote ledge... then I realized that "pro" has a very wide spectrum!).

We walked along a wide valley, up a gentle slope, then to a panoramic view point and very strong winds!  The view, though, was pretty stunning:  dozens of mountains up-close, and more mountains still in the distance -- each seemingly scraping the low-hanging clouds.  The sky, while gray, was very vibrantly so.  And when the sun did occasionally gleam in the distance, casting patches of orange light through the layers of clouds... well, it was a beautiful sight. 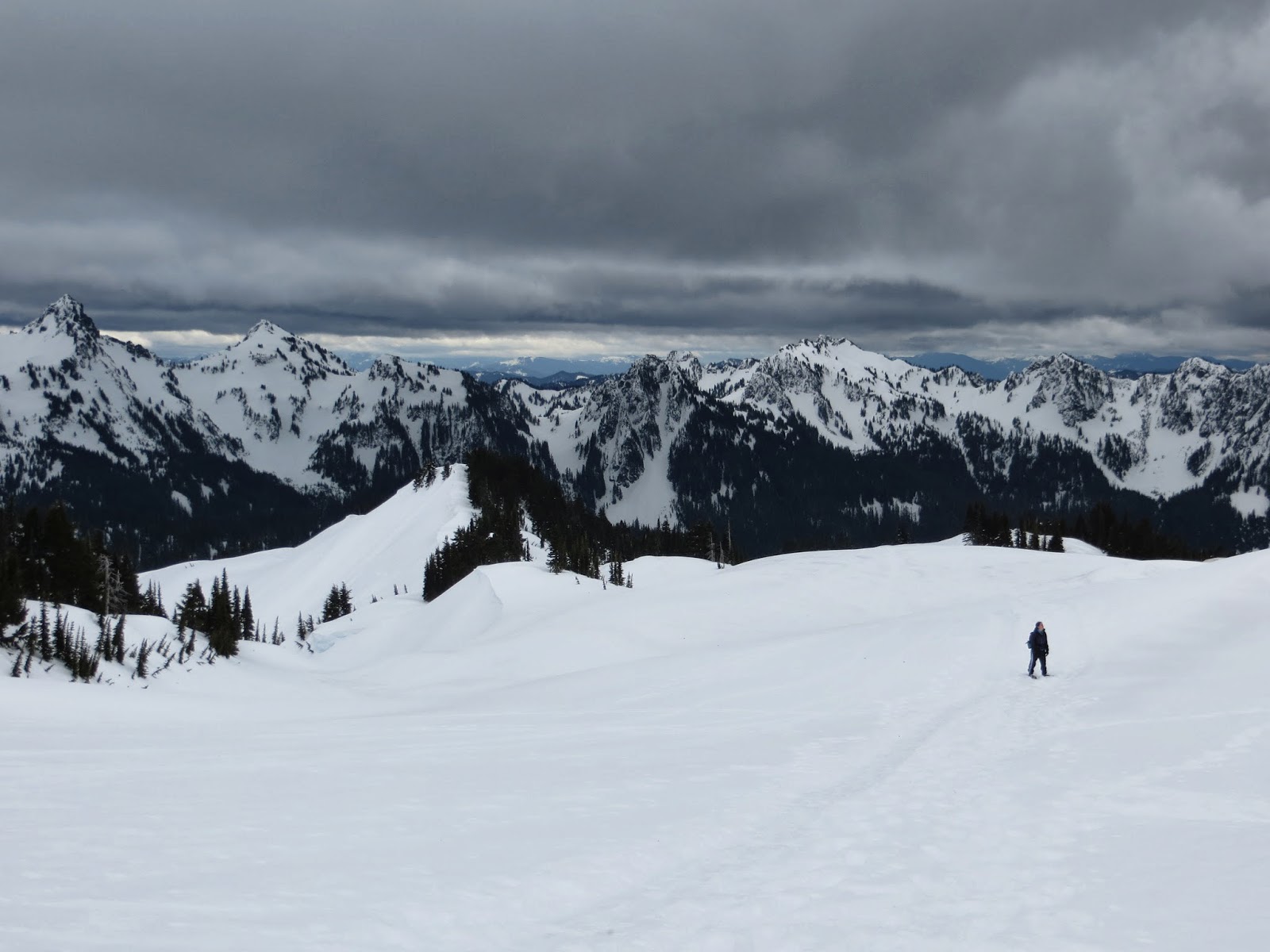 From that viewpoint, we continued up another slope, around a bend, and came to the view of Mt. Rainier shown in the first picture.  It was here that we really were thankful to have our avalanche gear:  there was just one small section we needed to cross that could have been unsafe (probably not in this weather, but still...), but without the trackers, we wouldn't have risked it.  With the trackers, we felt more prepared -- and could take the small risk of dashing across the steep-slope terrain (one at a a time, of course!) to take in the view. 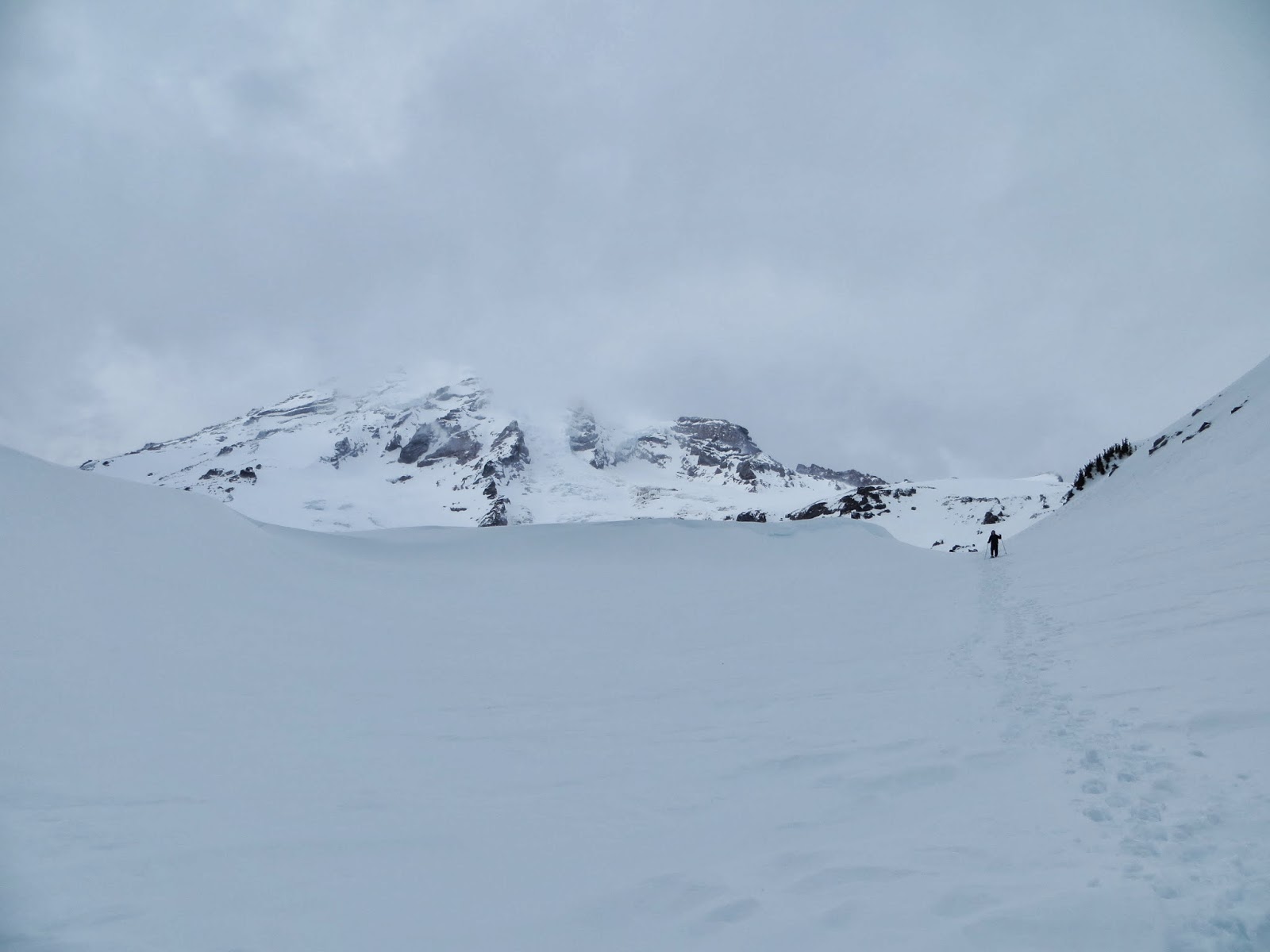 All-in-all, a great trip -- and the snowshoes, now on their second outing, worked wonderfully!  For this terrain, though, some telemark skis with skins would also have worked -- and would have made for a very fun and swift ride down.  I'd be curious to try out the sport... maybe next winter...

Glad you were snowshoeing and not near the mud slide where several people died!

It is great that you continue to get outside and enjoy the grandeur of living in WA. I'm quite envious of the mountains, snow, and snowshoeing right now. If you spend lots of time in the mountains (particularly in remote areas) then the transceivers are a good investment. –Erik

It is great that you continue to get outside and enjoy the grandeur of living in WA. I'm quite envious of the mountains, snow, and snowshoeing right now. If you spend lots of time in the mountains (particularly in remote areas) then the transceivers are a good investment. –Erik