After retrieving our car Wednesday afternoon, we drove northeast, past the Italian border towards the Austrian town of Kartitsch. Here we met up with Erik’s family where we would spend the next four nights at a charming apartment in Gasthaus Dorfberg (we highly recommend this excellent hotel).

On Thursday, we all began our exploration of the Sexten Dolomites by strolling along the Pratopiazza basin – which, per Shorter Walks in the Dolomites (Cicerone Guide), is "one of those rare, perfect alpine basins, dotted with pines and inhabited by contented dairy cows and photogenic timber chalets, but with the extra appeal of being encircled by a number of spectacular Dolomites” [see Walk 3].

After enjoying a quick meal at the Rifugio Vallandro -- which is also where Erik and Svenja introduced us to the popular Austrian dessert Kaiserschmarren, a delicious shredded pancake both sweet and egg-y, served with fruit sauce -- Michael and I went off exploring, intending to climb towards the base of Croda Rossa. Instead, we were lured by the beautiful spring meadows: 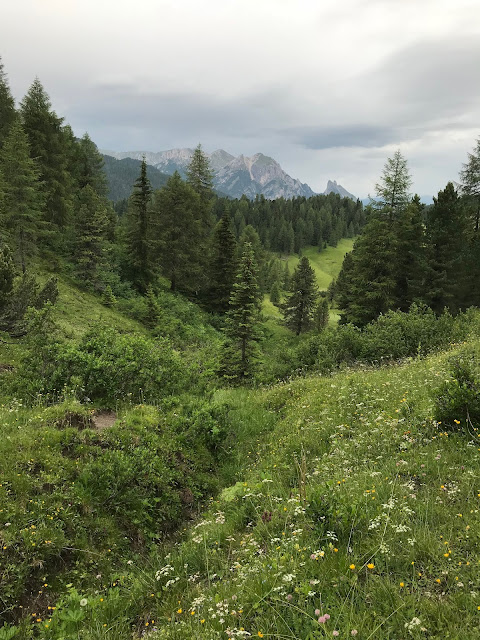 On Friday, while Erik and his family explored the nearby towns, Michael and I ignored the cloudy skies and headed off for a hiking adventure in the famous Tre Cime area to the southwest of Sesto. Starting at the Dolomitenhof hotel, we hiked south past Rifugio Fondovalle and up another 2,000ft to Rifugio Zsigmondy Comici.

With rain clouds obscuring most of the views, we had considered heading back.  But then, hoping that the ever-changing weather would blow away the clouds, we decided to continue westward towards Rifugio Locatelli. 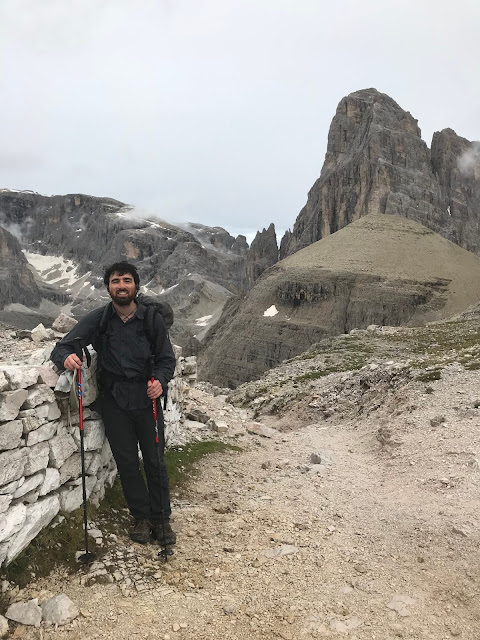 As we had been hoping to try out more via ferratas, we chose the Sentiero delle Forcelle route, followed by a 600m-long tunnel complex dating from WWI. As the weather cleared, this route offered exceptional views, as well as a humbling glimpse into the horrific experiences WWI soldiers must have had to endure. It’s one thing to be safely strapped into a reinforced easy-rated via ferrata on a fine summer day, enjoying the mountain views and conquering peaks for pleasure.  It’s quite another to imagine the travails of wartime soldiers, forced to fight avalanches and bullets. The history here certainly added a new layer of perspective to the thrills of hiking and climbing, inspiring great respect for past sacrifices and the peace that now allows similar routes to be enjoyed today in leisure. 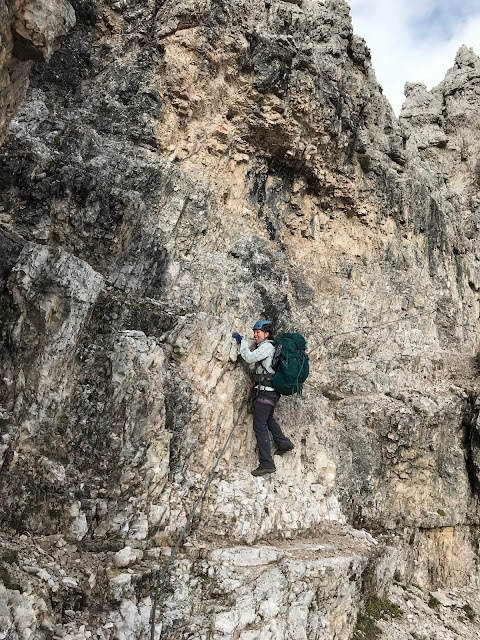 The views became even more exceptional, as the fierce winds swept the clouds away over the passes: 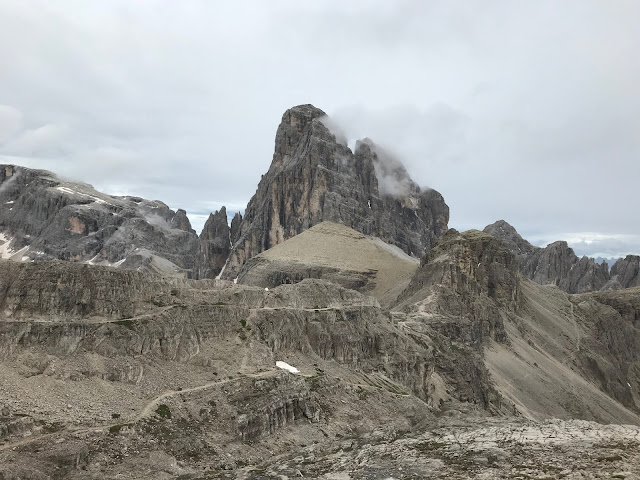 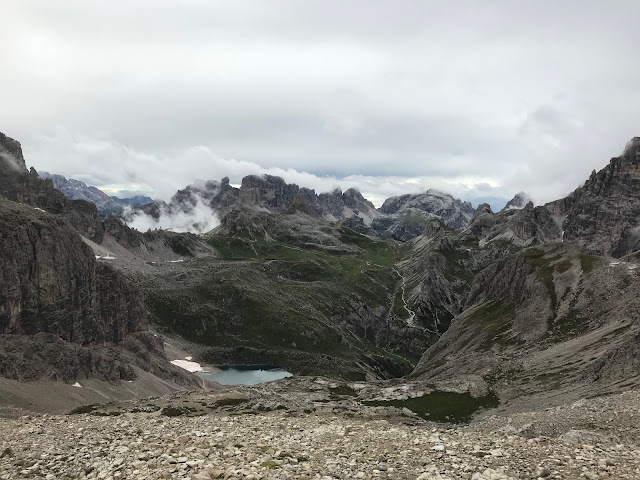 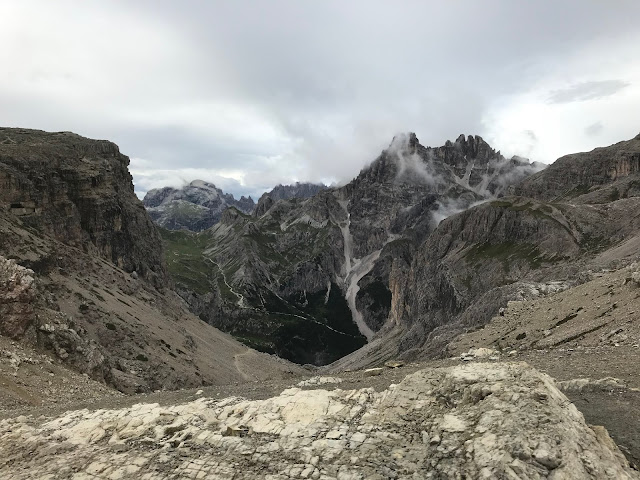 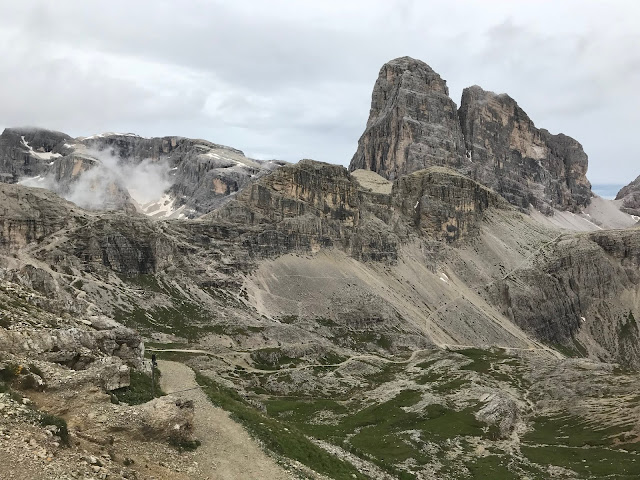 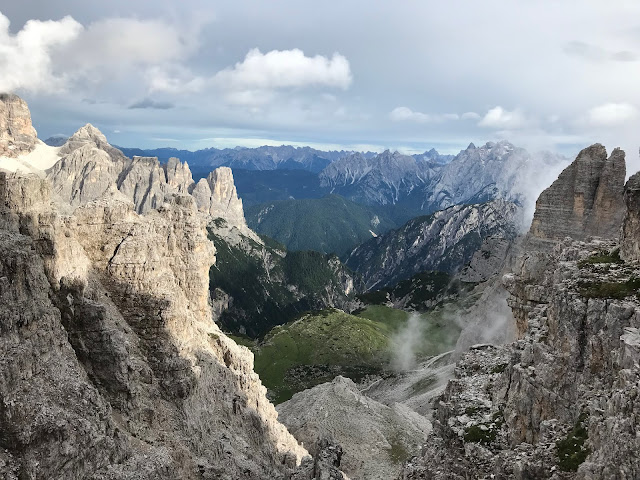 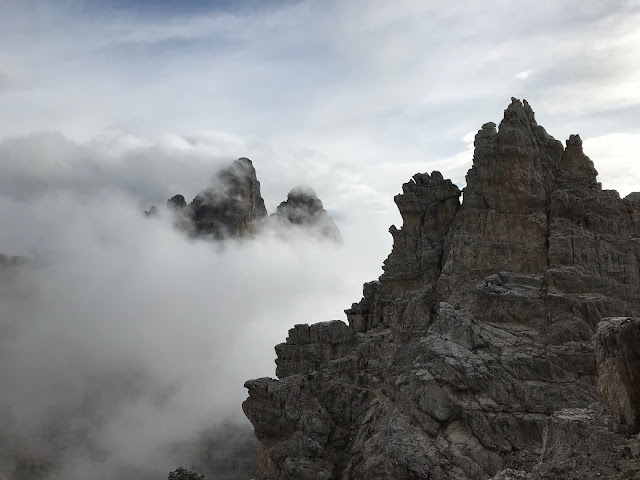 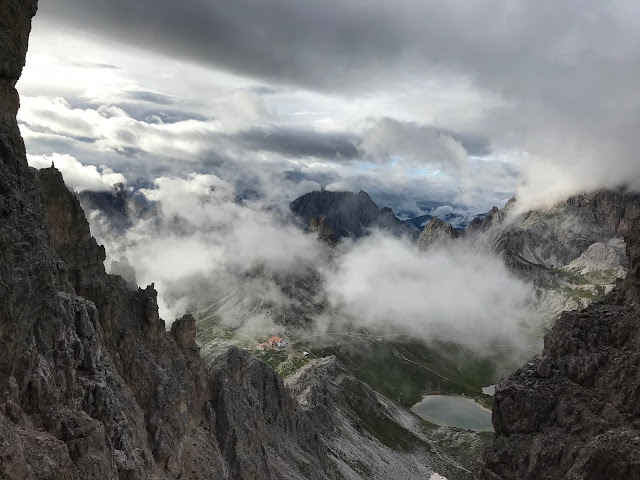 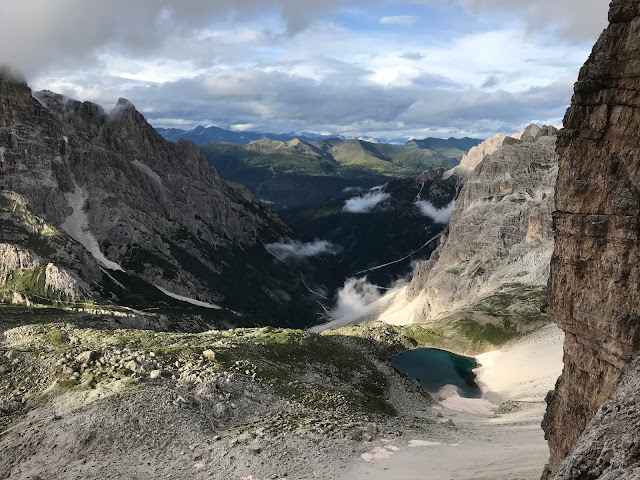 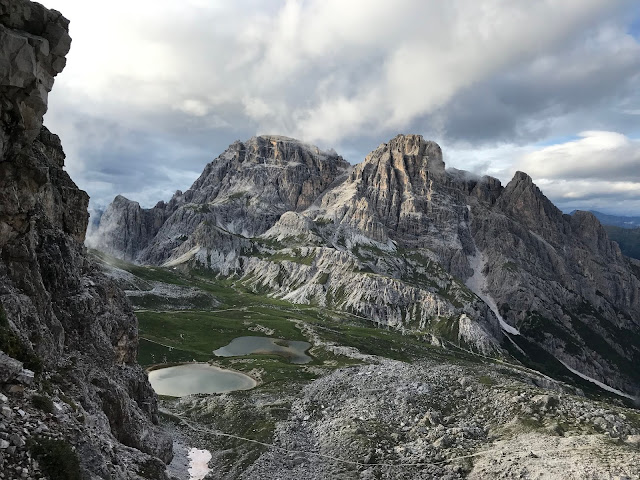 After we reached the top of the pass at Monte Paterno, we began descending, first aided by via ferratas, and then through a series of WWI tunnel with long flights of stairs and occasional lookout windows.

On Saturday, all of us headed to Misurina to embark on the one of the most iconic hikes of the area: the classic 10km Tre Cime di Lavaredo loop, which encircles the famous “Three Peaks”.
This area is so popular that despite requiring an expensive fee to access, there is also a limited number of cars allowed at any given time. After we had all piled into a single car and waited some 20 minutes in line, we finally drove up to park at Rifugio Auronzo.

Despite being a bit over-crowded, the hike was phenomenally beautiful. It was also an awesome experience to see some of the same areas we had hiked through the previous day from different perspectives (Michael and I veered off to take the longer route eastward on 104 before looping back on the low 101 route to Locatelli). 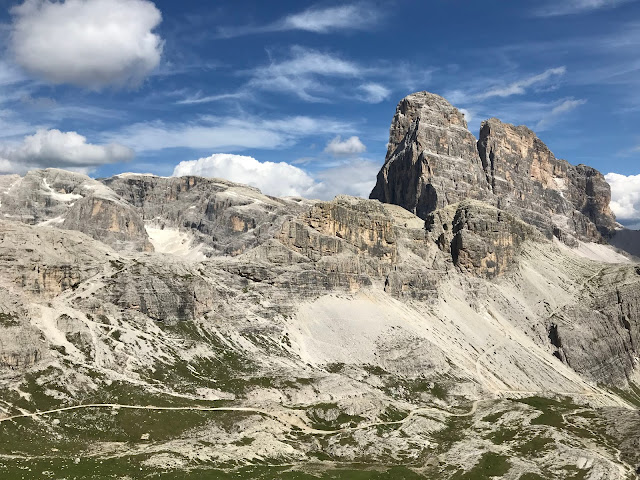 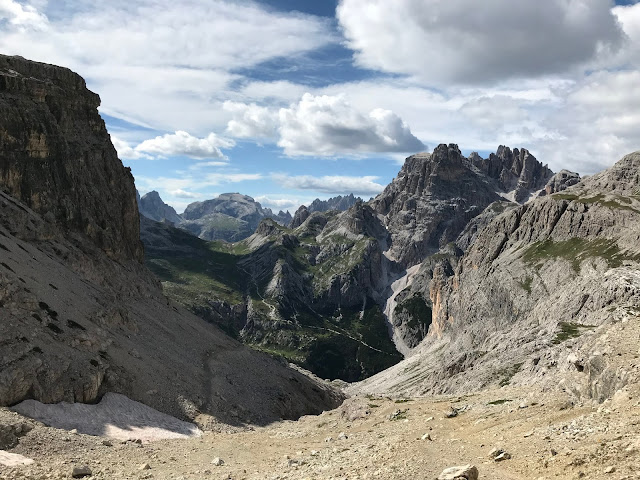 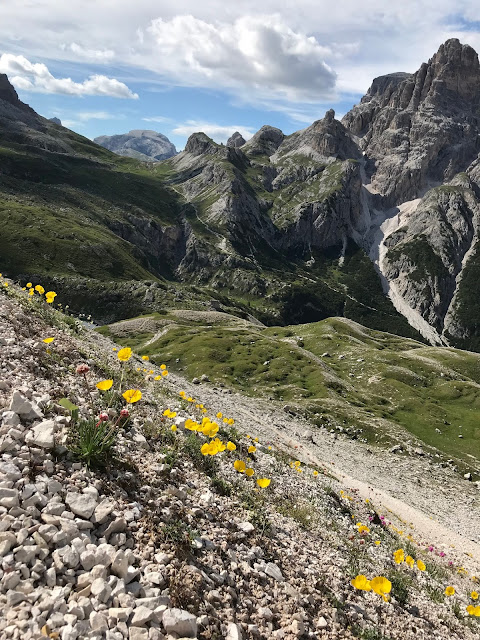 Erik and Michael even got to enjoy a frigid swim in a small lake, complete with its own idyllic “mermaid island” (a term dubbed by Erik).

Erik diving back into the water:

Michael diving back into the water: 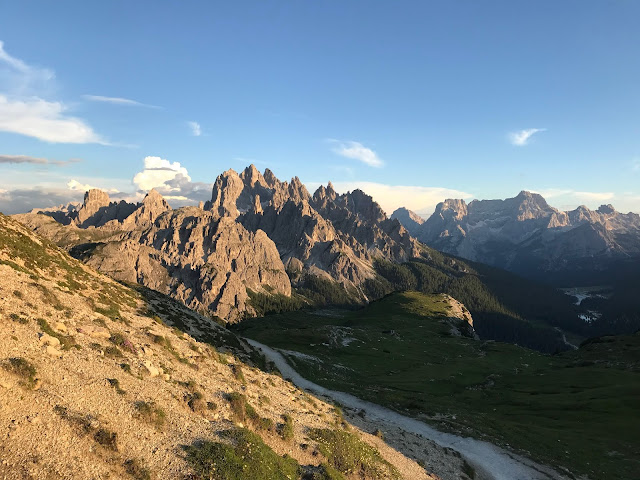 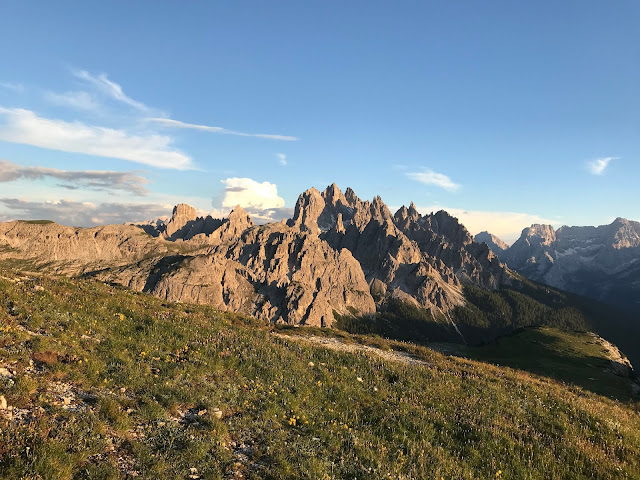 Finally, as the week drew to a close on Sunday, we said goodbye to Erik and family: we thoroughly enjoyed our time with them, and hope to have more adventures with them in the future!  (Spoiler alert: we already did, re-meeting-up in Alaska just a few weeks after.  But the more often, the merrier!)