Finally, on the morning of the seventh day, it was time to say farewell to this beautiful area. The nearby glacier views by the hut really were phenomenal, and all around, we were glad we had chosen our path, all the way from Young River, across Gillespie Pass and into Siberia Valley, and then up along the Wilkin River Valley. 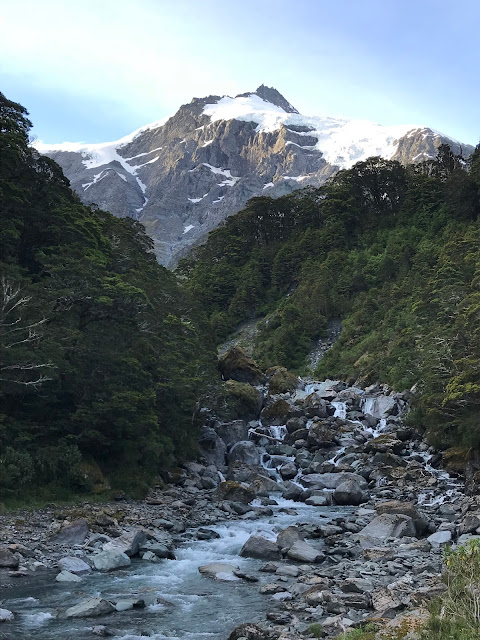 We had originally planned to leave later that afternoon, so as to have time to hike out to view the infamous Waterfall Face (a very steep rocky wall covered in snow grass, which can be dangerously slippery with even the slightest bit of rain).  In fact, I had originally looked into extending the trip by another day or two by hiking over Waterfall Face and out towards East Matukituki valley, but realized this would be too challenging. Instead, we opted to have a helicopter pickup, pre-scheduling the flight before we left Wanaka (extravagant as it might sound, this is a fairly common way of getting in or out of backcountry trails in New Zealand), and we were really looking forward to this.  (Coincidentally, despite my dad being a helicopter pilot for the Air Force, I myself had never had a chance to fly in one before.)

With an approaching storm, but no way to get in touch with the helicopter company, we were lucky to meet up with a mountain guide at the hut, who happened to have a satellite phone and who also was planning to leave that day by helicopter with his group. He was able to get in touch with the helicopter company and to combine our two groups.  We would share a flight on one of their 7-seater helicopters (which was great for us too, as it made it much less expensive than a flight scheduled solely for us), and leave before the thunderstorm became a potential problem.


The flight was great! To Michael, the way that the helicopter moved through the air felt a bit like science fiction, and generally reminiscent of the flying-beast scenes in Avatar: with the sweeping panorama of flying right through the heart of the mountains, just a few hundred feet above the creek bed.  It was a short ride – only fifteen minutes long (though it would have taken us at least two days to hike out!) – and was utilitarian in terms of its purpose (no special sight-seeing; just get us from the backcountry back into town), but New Zealand's natural beauty made it a sight-seeing trip all the same.

Back in Makarora, we had some breakfast at the cafe while we called a taxi to return to Wanaka (it didn’t seem like there was enough traffic to hitch-hike). After a relaxing evening – along with some laundry and re-packing – we caught an early bus the next morning back to Queenstown, and headed back to the North Island for the last few days of our trip.

Overall, we truly enjoyed this hike, and were also very thankful that we ended with no injuries greater than some minor ankle twists and major blisters. Being quite footsore made us appreciate our feet even more, and how many steps they had taken to carry us across some 57 miles and 5 major different valleys. Our first long traverse debuted a success: it was a great experience with lots of good memories, leaving us with a strong desire to keep hiking multi-day traverses and keep getting stronger (and also to appreciate the non-sandfly and generally non-mosquito mountains in Washington, so easily accessible to us in the summer!).


Here's the Google-Earth fly-through of our hike, following the same purple and red routes. What an awesome hike!


Stay tuned for the upcoming final blog post about our experiences in Rotorua, which served as an exciting finale to our New Zealand trip!


Here are links to the previous days: