Our adventure began just north of the town of Makarora, heading west off State Highway 6 toward “Blue Pools”.

Start of Hike and the New Zealand Sandfly

As we started hiking among the beautiful silver beech trees, there was a bit of trepidation in our steps as we wondered how our first big hiking adventure would go – not just concerning the physical weight of the packs and the strain of hiking day after day, but also the many horror stories we’d heard about New Zealand’s notorious “sandflies”. While on the plus side, New Zealand is known for having no dangerous predators like bears or poisonous snakes, New Zealand hikers are nonetheless plagued by a different sort of beast: by hordes of non-fatal – but very unpleasant – mosquito-like biting insects known as sandflies. They’re more known for populating the West Coast of the South Island, but I’d read that they can also be found along river valleys, like the ones we’d be hiking along.  And sure enough, as we paused to admire the crystal-clear blue-tinted waters of the Blue Pools, pulling out our sandwiches with the intention of taking a quick lunch break, we were soon batting away tiny flies from our exposed hands and faces. After watching while a couple of German tourists jumped off the 30-ft bridge into the pools below, we cut short our lunch-break and kept moving. And indeed, this was the secret we would soon discover: unless lucky enough for it to be too cold, hot, or windy for the sandflies, the trick is simply to keep moving. Unlike many mosquitoes, the sandflies only seem to be a problem when paused. This allows hiking to still be very enjoyable while on the move, but the hiking becomes less restful – as it’s hard to take pleasant breaks to really appreciate the views while fending off the tiny pests. 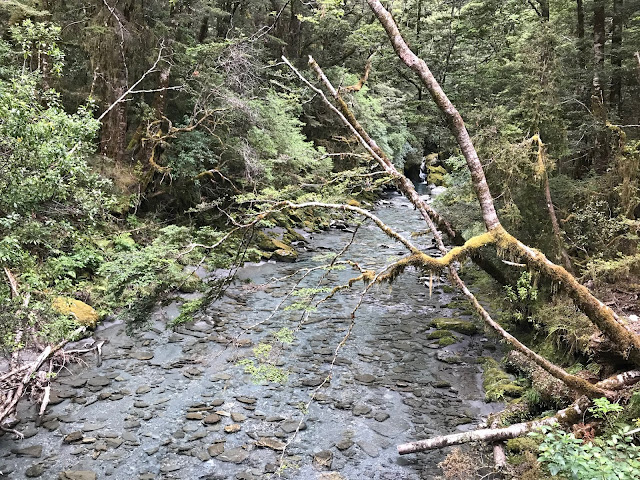 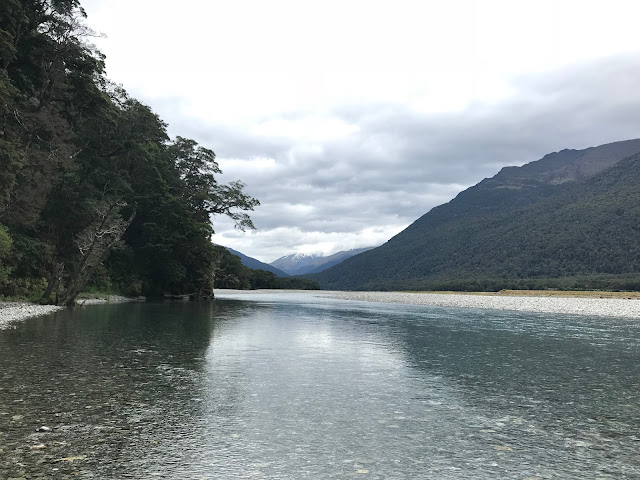 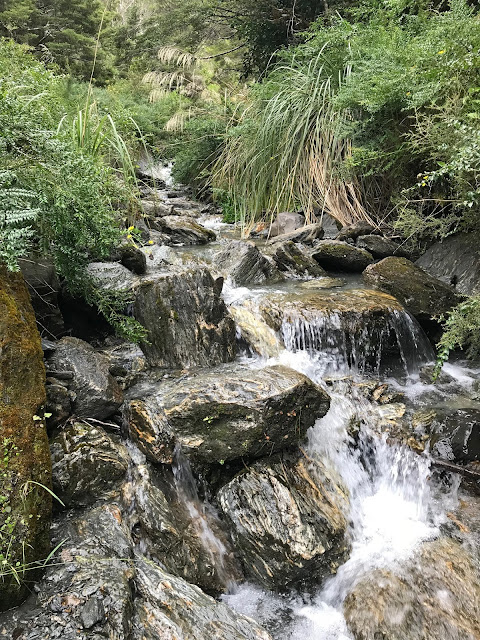 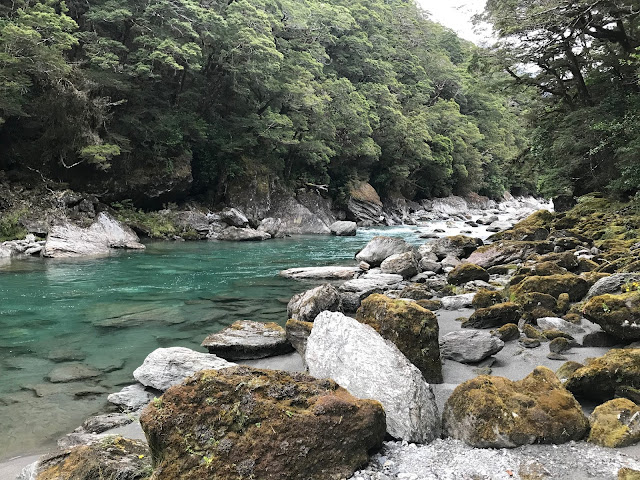 After leaving behind the other tourists at Blue Pools to head south towards the start of the main trail, we soon made our second New Zealand hiking discovery: distances on this trail would often take us much longer to traverse than we had expected. Although we’re experienced day-hikers, and have done many a backcountry-hike, we’ve grown accustomed to the highly-maintained trails of Washington State. We had intentionally chosen a more rugged trail for this trip, which – on the whole – was quite enjoyable, as it gives a more natural feel as the trail scrambles up and down, winding in and around various tree roots and rocky outcroppings.  As we should probably have anticipated, though, we ended up hiking much slower than our customary speed of 3mph on a supposedly "flat" section (i.e. zero overall elevation gain, yet bunches of gnarly roots or rocks or both to climb over).

We had also gotten a false impression of distances, in part by the trail sign on the way to the Blue Pools, and the multitude of signs a few days earlier at Urupukapuka Island. At these popular tourist destinations, the time estimates were clearly aimed at amateur non-hikers, suggesting 30 minutes for the well-graded half-a-mile trail to the Blue Pools, for example. Reaching the pools in only 10 minutes, we assumed we would continue to hike at half the suggested time.  But how wrong we were! Indeed, the time estimates on the backcountry signposts were clearly using different standards – aimed at a fit New Zealand hiker rather than the casual tourist – and we consistently found ourselves going at least 25% slower than their slowest estimates!

So between the extra backpack weight (and the general adjustment to multi-day hiking), and the more careful foot placements required on these more rugged New Zealand trails, we definitely found ourselves spending much longer amounts of time each day hiking than we had anticipated. As a con, this meant we had less time to relax and enjoy the placid feeling of being out in nature; but on the plus side, staying on the move for most of the day meant less time trying to fend off the pesky sandflies J 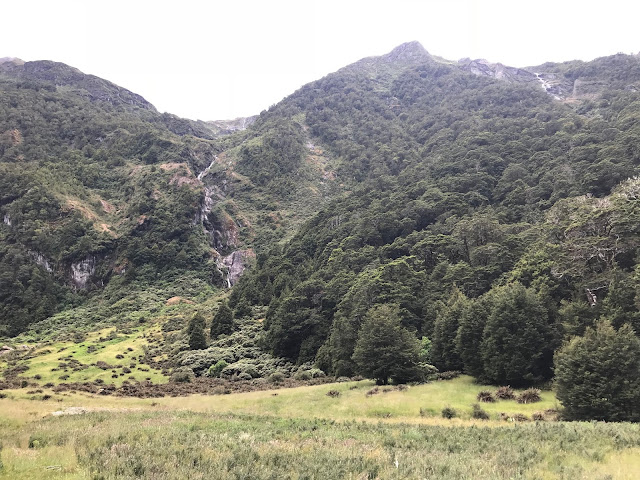 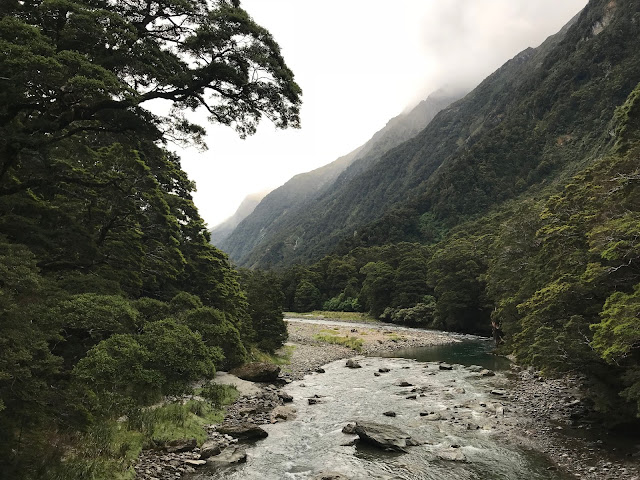 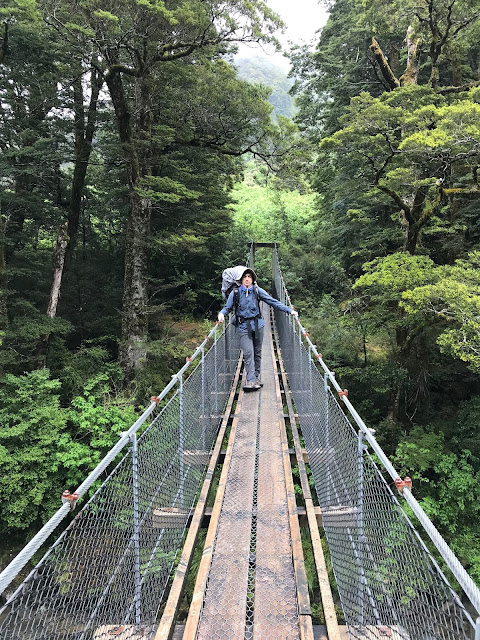 The first evening, we decided to stop a bit early, at the first Young River campsite (about 12 miles in, with views of several large waterfalls), where we were welcomed by a family of experienced Kiwi trampers (the locals call themselves Kiwis, and call hiking “tramping”).


From our enjoyable conversations, we learned of several native tips.  First, while you don’t have to watch out for bears in New Zealand, one should be wary of the Kea parrot – an inquisitive and often troublesome bird that has been known to open backpacks to steal food, or just to entertain themselves. (Apparently, they can also cause damage peeling off rubber door seals and pulling at antennas on parked cars… But despite their mischief, they’re a beautiful bird heralded as one of the most intelligent bird species, and the only alpine parrot in the world.) We also learned that “real” Kiwi trampers hike only in shorts, with gaiters covering the top of their boots, and ford right through rivers without removing their boots. Apparently, the gaiters help protect the legs against wet grass and light splashing from shallow streams. As for deeper river crossings, we were informed (much to our surprise, having been firmly entrenched in the “keep your feet dry” mentality) that “hiking with wet boots and socks really isn’t bad once you get used to it”.

We weren’t too sure about this strange attitude, but as we learned later throughout the trip, there are so many rivers in New Zealand, that fording in wet boots really is the norm for backcountry New Zealand hikers, for both speed and safety.  Taking off or trading out shoes at every river crossing adds a drastic amount of time to the total hike, and the sturdy ankle protection, solid traction, and added warmth of tight-fitting boots are considered an important safety feature. As I also later discovered, taking time to remove one’s boots before fording has the additional drawback of allowing the sandflies time to descend and feast on bare hands and feet.


Here are links to the other days:

Sorry, but those sandflies are a real turnoff. This would definitely not be our thing. Even though the scenery looks wonderful!