For my birthday, Katrina and I headed to the Olympic National Park in western Washington, spending two days right on the coast, and two additional days in a coastal rainforest. Despite being literally in the wettest place in the contiguous United States (and forgetting our tent at home - oops!), the weather was pristine: bright sunshine and a few picturesque clouds in the distance.

The coast was unlike anything I'd seen before. At high tide, water comes up right to a line of evergreen trees that grow along the coast; at low tide, the water recedes far into the ocean, exposing a long ﬂat stretch of rocks, kelp, and sand. 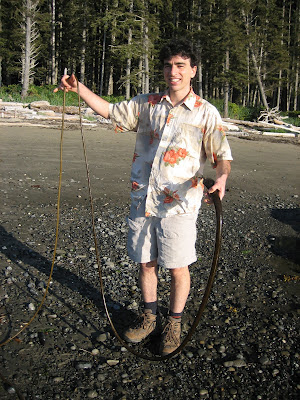 What's this? A natural jump-rope made specifically for my birthday?


The shore was home to starﬁsh - thousands of them, clinging on to the rocks and to each other. There were also sea anemones, soft and jello-esque to the touch, and a variety of crabs and other small sea creatures. We set up camp at South Sand Point, on a stretch of sandy beach that was just starting to transition to rocky coast-line. Of all the spots we later saw on the coast, this remained our favorite: it afforded a great sandy beach to walk on, while harboring starﬁsh and other creatures amidst its algae-covered rocks. It also offered a spectacular vantage point for sunsets. 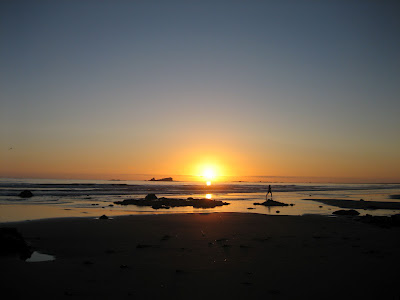 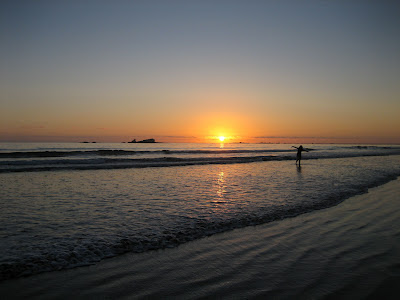 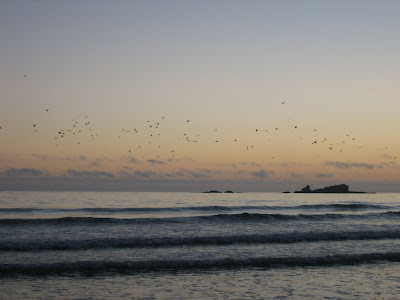 The sunset I saw on my birthday may have been the prettiest l‘d seen in my life.  I don't have it captured on camera (partially because I didn't want to get to get distracted, and partially because I knew my camera wouldn't do it justice), but take my word for it: it was spectacular!

We camped for two nights under the stars – which you notice much more when you don't have a tent. On our one full day on the beach, we walked several miles there and back down the coastline. Most notable was a a spectacular tree drawing in the sand, courtesy of Mother Nature. 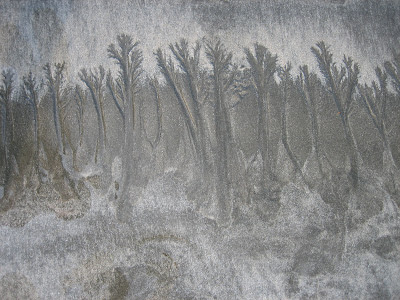 Michael the Poet (age 5-17):  "How picturesque the branches, how slender the trunks, how artful the sense of depth!"

Michael the Bright-Eyed College Student (age 17-20):  "I wonder why this particular spot on the beach is so conducive to these tree drawings, while similar expanses of sand are not.  How might other factors – slope, weather, humidity, tide – impact these drawings?"

Michael the Programmer (age 21-24):  "Could I write a program to model this with fractals?"


On our way back to the car – while all of the serious hikers walked to and fro on a trail 200 feet from the water, Kat and I put on our packs, took off our boots, and walked knee-deep through the surf.  Then, once our feet had accustomed to the cold, we tossed the packs aside and went for an absolutely exhilarating and adrenaline-rushing swim.  For my part, I mostly stayed at the edge of the breaking waves, shouldering the smaller ones and stomping towards or galloping away from the bigger ones.  Thus we played for a good 15 minutes, until even the adrenaline could not mask the cold; then we got out, put on our backpacks, and proceeded along the beaten trail.  But as we were leaving the beach, we saw two people cautiously approach the water and even dip their dainty little toes in – something we hadn’t seen throughout the whole duration of our stay.  Maybe we served as an inspiration?

Next on our extended-weekend agenda was the Hoh River Valley, and the formidable rain forest that surrounds it.  The trees in the forest were fantastic – many stood over 250ft tall, with branches the size of normal trees’ trunks.  One Sitka Spruce, at the entrance to the park, measured 14 feet in diameter!  The trees were also clad in copious amounts of moss, which hung on branches like liberally-dished-out tinsel. 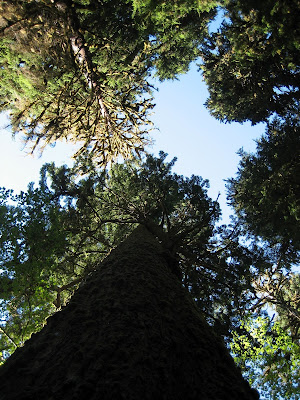 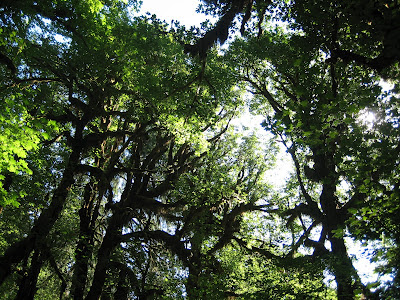 The Hoh River trail leads from the Visitor Center to the “Glacier Meadows” campsite, 17.4 miles away.  By all accounts, it sounded like a beautiful place that we wanted to visit, but we weren’t quite sure how it would fit in – all we had was two half-days and one full day.  With evening closing in fast behind us, we set up camp five miles into the trail, and decided to do the remaining 25 miles (round-trip) as a day-trip the following day.  Sure, it was a bit of a tall order – but I’d grown rather fond of the number “25” lately.

It was a long long long walk through the forest.  Then a short pause, and another long long walk.  The first seven miles were pretty flat, so we cruised along at 3 miles per hour along dense forest and occasional picturesque streams.  Then we crossed a gorge, and for the remaining six miles the trail became moderately steep, gaining 3,000 ft.  The trees began to thin, and we started getting occasional glimpses of our surroundings:  first some foothills, then real mountains, then glaciers and snow – and still the trail continued onward. 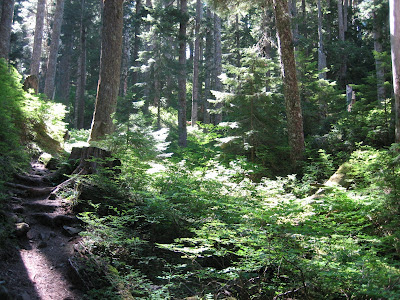 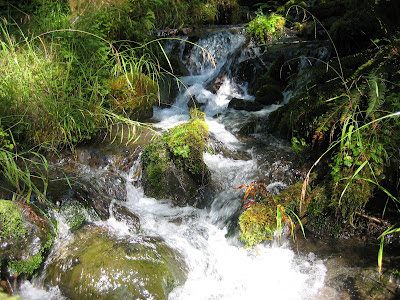 One section of trail had recently washed out in a rock avalanche, and was now replaced with a unique rope ladder: 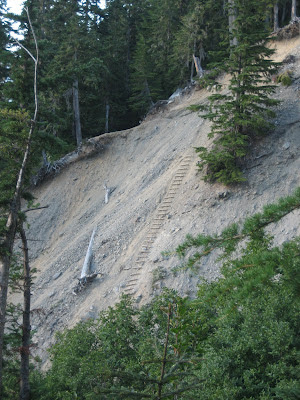 When we got to mile 17.4, thoroughly exhausted, it turned out that the famed meadows and glacier views were still another 1.3 miles (and 1000 ft elevation gain) away.  So we trudged on – and despite the steep incline, that last mile was by far the prettiest in the whole hike.  The trees cleared away completely, exposing jagged mountains, alpine flowers (here it was still springtime!), caps of snow, and miles and miles of visibility – with white clouds framing the horizon. 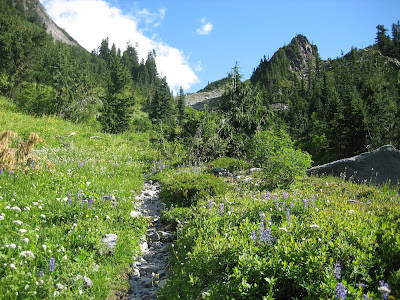 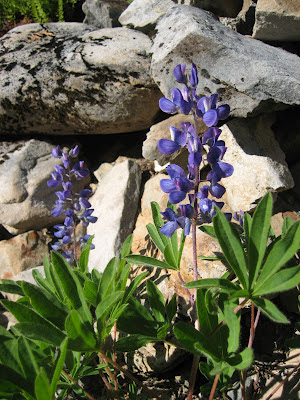 Then the ground fell out from beneath our feet, and we had reached Blue Glacier – as far as mortal humans (e.g., non-mountain-climbers) can go.  The small round peak on the top right (“small” as in from this vantage point – it’s the rightmost and furthest of the three topmost bumps against the sky) is Mount Olympus. 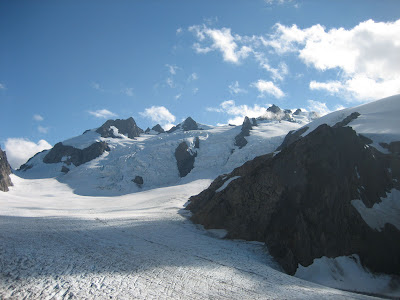 We did it!  Never mind that we still had 13.5 miles left to go back, and only four hours of daylight!  The alpine views and the glacier were worth it.

That was the reaction as we were turning back.  Four hours later, it changed to:  “We did it...  Dear Lord, we STILL have 7 miles to go, and it’s already pitch black.  Were the alpine views and glacier really worth it?”.

No, I’m joking.  We never questioned the worth.  But we did have 7 miles in the dark, with just a pair of headlamps to light our way through the utter blackness.  We got back to our tent at midnight, 15 hours after we’d left in the morning, and having covered over 27 miles in one day!

This is what a dense coastal rainforest looks like at night: 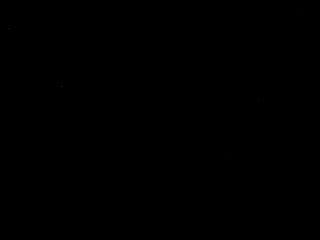 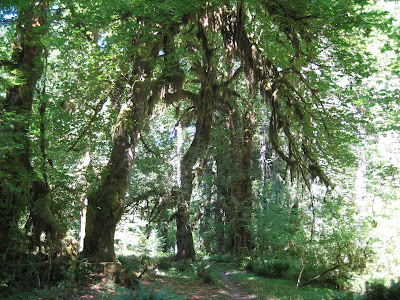 The Hoh River Valley and rainforest was a thoroughly impressive place.  The trees, the mountain meadows, the glaciers – all made for a wonderful trip.  And the pristinely sunshiny weather – in a place that boasts 140 inches of rain per year – was a particularly appreciated birthday present. 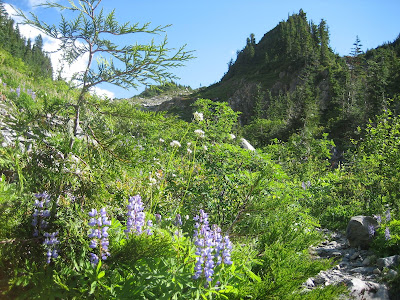 If you’re ever in the Olympic Peninsula, do give the rainforest a visit.  Though you might want to give the local weatherman a call, first. 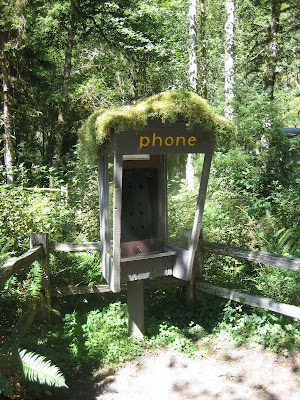