Leaving Kartitsch, we drove through Italy, back through Austria, and into Germany for the final stage of our trip: visiting three of King Ludwig II’s castles, in particular the renowned Neuschwanstein, arguably the most famous castle in the world.

We started with a brief visit to the Linderhof Palace – the only castle built by King Ludwig II that was actually completed in his life, and where he lived for some 8 years until his death. Unfortunately, the most unique feature of the castle – the magnificent artificial Venus Grotto designed to illustrate an act of one of Richard Wagner’s operas – is closed for restoration through 2022. However, the park has extensive formal gardens, and the palace itself is known for its ornate beauty.

When we arrived at the grounds, we were surprised by just how small the palace seemed to be. While waiting in line for the tour to start, we enjoyed views of the grounds, watching as a fountain began shooting water out of the front pool, rising higher and higher until it reached some 25 meters. Looking back, this display of impressive power seems well representative of this strange king, who’s become such a mysterious legend.

For a brief history: King Ludwig II was thrust onto the throne of Bavaria at the young age of 18 when his father unexpectedly died in 1864. Just two years later, Prussia conquered Austria and Bavaria, reducing Bavaria from independent kingdom to mere vassal state, stripping away much of the king’s ruling authority. It seems Ludwig II was so obsessed with his admiration of the ideal of absolute sovereignty that he retreated more and more from public life into his own fantasy world, where he could design immense and glorious castles that were to be built for him alone as a monument and testament to the absolute ruling power he so desired.

With our first steps inside the Palace, we immediately understood why Linderhof – though small – is prominently featured on lists of must-see castles near Munich. With a sense of stunned wonder, we followed the guide from room to room, jaw agape, utterly amazed at the incredible level of ornate decorations surrounding us. Never before had I imagined such extravagant, sumptuous, lavish, intricate details. This castle must truly represent the embodiment of the word “opulence”. Linderhof was dedicated specifically to the absolutist rule and power of Louis XIV of France and modeled after Versailles. Though a much smaller building, Linderhof often seems to exceed Versailles in terms of sheer opulence per square inch. I personally found the entire style of Linderhof to be rather stark and cold, so excessive in extravagance – with more gold than I’ve ever seen in my life – that it seemed too unreal to be truly beautiful. But most, it seems – including Michael – feel only stunned admiration as they stare at the elaborate decorations, particularly the “hall of mirrors” room (again inspired by Versailles), with its seemingly magical series of never-ending reflections.

It seems incredible that all this wealth was designed as a refuge for a single man: towards the end of his life, Ludwig II began living more and more as a royal hermit, enjoying his fabulous luxury with an unusually low number of only six servants. And this was only his smallest castle: he also designed and began construction on the much larger Herrenchiemsee and Neuschwanstein, and had plans for at least three other equally ornate castles. 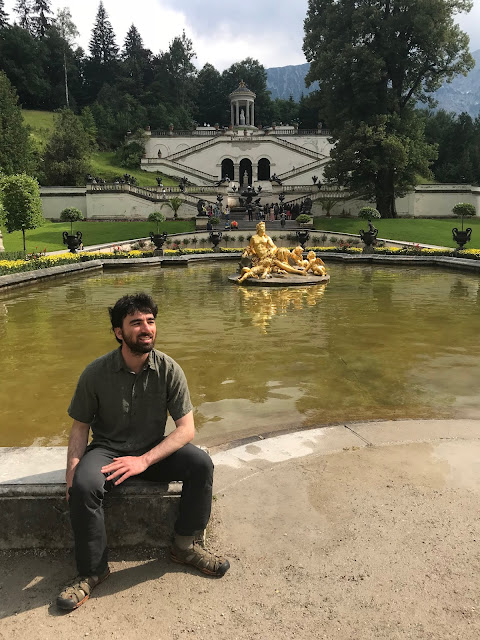 Leaving Linderhof – and the fantastical world of Ludwig II – later that evening, we spent the night at a hotel near another attraction: Europe's longest suspension footbridge ‘Highline179’ (which is also the 5th-longest suspension footbridge in the world). This 406-metre-long modern bridge connects the Ehrenburg Castle ruins with Fort Claudia, two previous outposts built to help guard the strategic valley pass between them. It was certainly an interesting experience to be looking down through a metal grate gently swaying in the wind, at cars racing hundreds of feet below you.

The following day we set out to return to the fantasy world and join the other thousands of visitors thronging to admire King Ludwig II’s chef d’oeuvre: the most famous of fairytale castles and direct inspiration of Disney’s design – Neuschwanstein Castle. 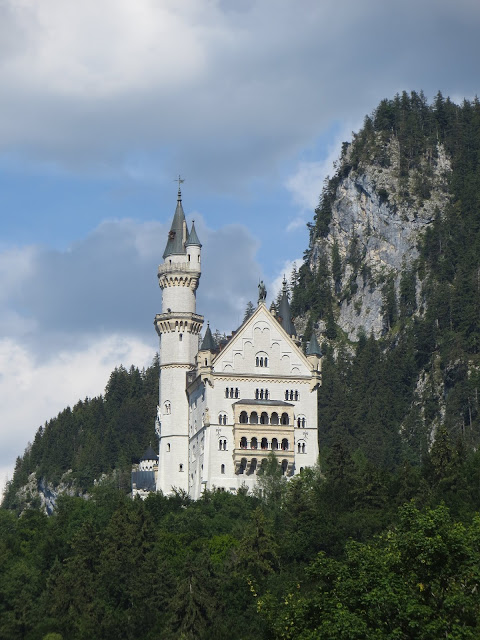 This extraordinary castle – framed by towering mountains, an alpine lake, and forested hills – is so popular that reservations must be made well in advance to be permitted to view the interior as part of a brief 30-minute tour. We started out the day with a tour of the nearby Hohenschwangau castle: King Ludwig II’s childhood home, lovely in its own right, which had been reconstructed and remodeled by his father, and served as the original inspiration for Ludwig II’s love of castles and medieval fantasies.

Later that afternoon, we at last entered the magical Neuschwanstein: a castle completely different in inspiration and decoration from Linderhof, serving as an ode to medieval times and Romanesque architecture, much grander in size and scale, and yet so similar in the sheer magnitude of luxury, opulence, and fantasy atmosphere. 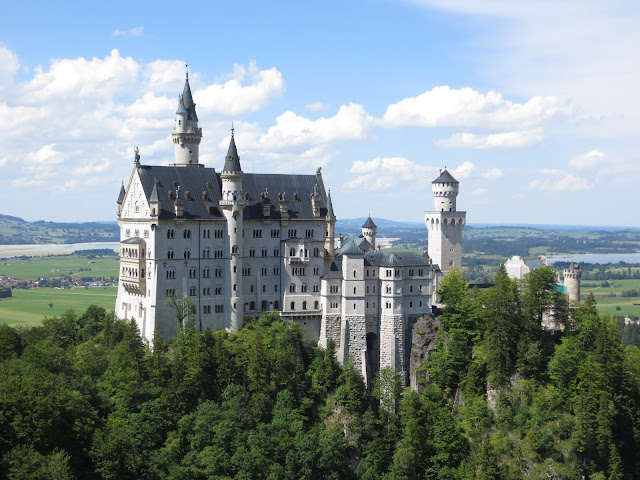 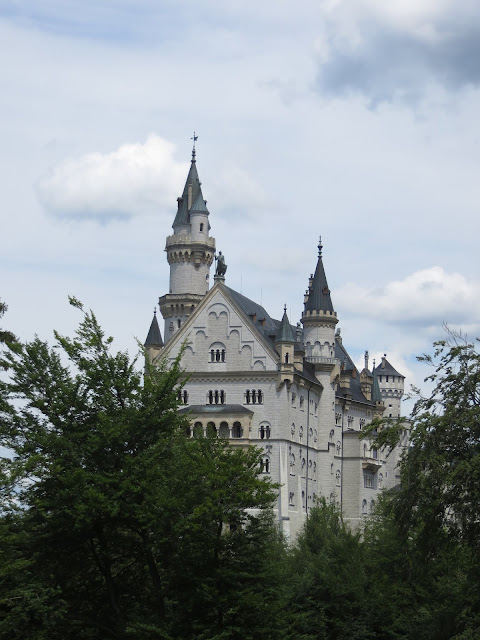 Gazing up at it from up-close, the castle is mind-numingly monumental.  It is truly hard to imagine the arrogance and accomplishment of a man who could design it -- and the magnificent details therein, like the massive Throne Hall (inspired by Byzantine churches with a 4-metre chandelier) -- to be intended for him as the single occupant. It would be more understandable if Ludwig II had created such a room for large festivals of state, or at least for a large boisterous family or enormous parties. But instead, the solitary Ludwig II is known for having never wanted strangers to be allowed into any of his castles.

In the end – in a noteworthy lesson of the dangers of excess – his obsession with castles destroyed him. It’s been said that the Bavarian public would not have objected if Ludwig II had built only one of his extravagant castles. But six – Linderhof completed, two under construction, designs for three others, and possibly more down the road – was simply too much. Because he spent so much time and money on his fantasy building projects, while remaining more and more indifferent to state-business, he ended up being officially deposed in 1886, by means of being diagnosed as mentally insane. He died just a few days later in mysterious circumstances, adding to the mystery of his legend: was he actually insane? Did he commit suicide, or was he murdered? In a twist of irony, (similar to the fate of the Chateau du Haut-Koenigsburg, built to reinforce Germanic rule but soon to become a property of the French state), Ludwig II’s castles were quickly opened to the public after his death. The homes he had forbidden strangers to enter have since welcomed over 50 million visitors, regaining the original outlandishly-expensive cost to build in tourist income. 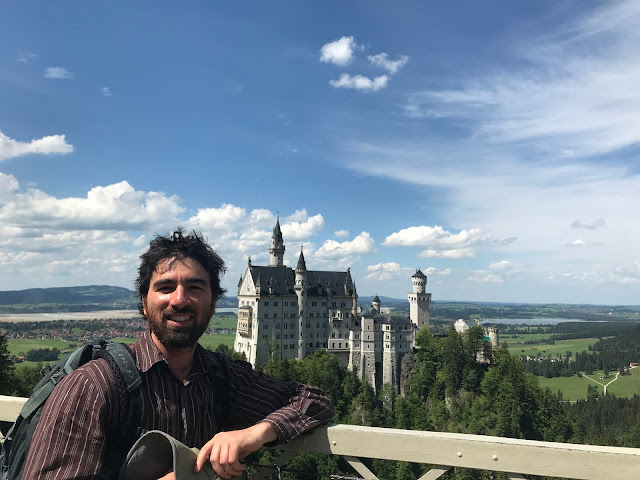 See Ludwig II of Bavaria – The Eccentric Life and Castles of 'Mad King Ludwig', or other sites online for more info. Despite Neuschwanstein’s overcrowded, touristy nature, it was well worth the visit, and served as an excellent ending to our trip!