This past weekend, I did a paragliding maneuvers clinic (aka "SIV clinic"), simulating incidents that can occur during flight, and learning to handle them. The gist is simple: you get towed by a boat over a lake, get to about 2,500ft above the water, release the tow line, and then listen to the instructor (who's watching you from ground level) walk you through maneuvers over the walkie-talkies strapped to your shoulders. In my particular case, the instructor was Matty Senior, a New Zealander with an Australian accent and one of Washington's best pilots. "Alright mate, now we're going to induce a collapse on the left side, so go ahead and pull on the left A risers. Yep, there you go. Now shift right to control the heading, then apply right brake to enter a low-g spiral. Keep applying, keep applying. Well done, mate. Let's do a full 360, then exit the spiral by releasing the brake, then releasing the collapse, and then take that wing's energy into a turn into the same direction to prevent a surge. Nicely done. Now let's do it in the opposite direction."
Ten minutes to tow, then 3-4 minutes of maneuvers (you're inducing collapses, stalls, spirals, and spins, so they burn through altitude pretty fast), then another 5-15 minutes of ridge soaring by the beach if the wind conditions allow... and you're back on the ground, watching the other five people in the group take their turn. Three runs on Saturday, three runs on Sunday – and you've got yourself a weekend SIV clinic. I was reminded of the phrase "long periods of boredom punctuated by moments of sheer terror," which apparently is a war adage, whereas this was a strictly voluntary activity – and in any case, the boredom wasn't long and the terror wasn't sheer. Never-the-less, there's definitely an interesting rhythm to the SIV exercise... 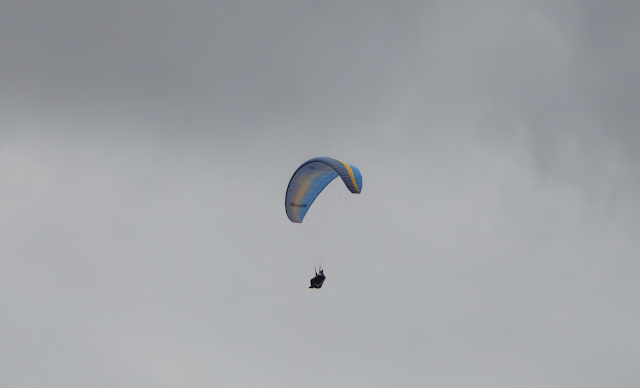 Matty gave us an excellent hour-long briefing before the start, but by the time we got to the boat, unpacked everything, and got going, I'll admit that I forgot a good chunk of it. Most crucially, I forgot how/when to release the tow line, so my first tow was quite the experience. Relative to normal launching, towing is a weird experience, as you have to keep making course adjustments to keep the tow line taut when the boat turns. I was so focused on watching the boat and making adjustment on my first tow, that it was quite unexpected when I realized that I was about to go into the clouds, which were fairly low that morning. Due to a problem with my radios, I couldn't make out what the boat operator was telling me to do, but I definitely wanted to remain tethered to something as I got engulfed in whiteness all around. I've never been in the clouds before, but I've heard the horror stories of going into the "white room." By remaining tethered, I at least wouldn't be lost flying around in circles or heading into the mountainous terrain nearby (it's very easy to get disoriented, and for the SIV course I didn't have the instruments that I usually fly with), and I wouldn't get sucked higher into the clouds. Engulfed in the dense white fog, I gave a nice pep talk to my wing, and we eventually emerged out the side of the cloud. By that point, the boat had stopped, and I was beginning to overshoot it, and the tow line was tugging awkwardly at me from the wrong angle. The situation didn't feel sustainable, and there were more clouds coming up, so I let go of the brakes, yanked on what I rightly guessed to be the release handle, and was back under my own control right as I heard Matty's voice come quietly on the radio to encourage me to do just that. Matty's voice transmitted louder than the boat driver's, so I was able to execute a few simple maneuvers (collapses and spirals) on that first run – and we corrected the volume issue for the subsequent runs.
Observations and lessons learned:
Though each run of maneuvers was just a handful of minutes, both days felt quite long and I learned a lot – both during my own flying and when watching the others. Driving back from Riffe Lake, I felt nicely satiated. But, writing this report four days later, I'm already excited about doing another SIV (I was initially thinking that I can wait another couple years... but maybe next year?). And I'm looking forward to doing some regular non-maneuver-y flying this weekend.
Thanks, Matty, for the excellent coaching, and to Kevin Stone & Maggie Johnescu for the excellent video footage!