Europe has such an incredible wealth of history, culture, and natural alpine beauty. For this trip, our main goal was to visit family and friends, while exploring new areas we’d never had a chance to visit before. In particular, our main destination was to be the entirely-new-to-us area of the northern Italian alps known as the Dolomites. 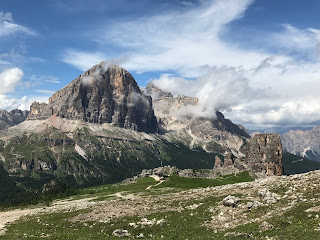 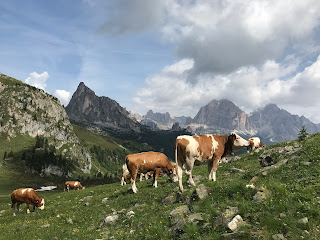 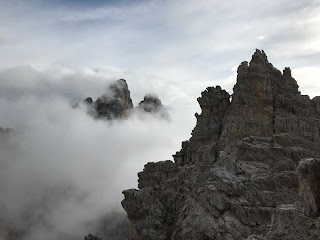 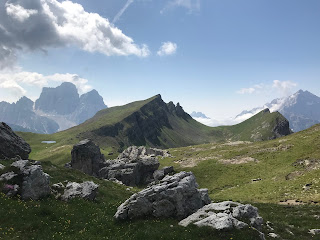 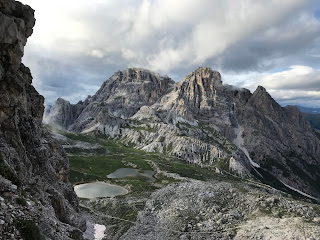 Our trip started on Sunday Jun 24th with a 10hr direct flight from Seattle to Frankfurt, Germany. (Dealing with a 9hr jetlag is never fun, but the flight was nicely timed overnight, so we could get some sleep on the plane, but still be tired enough to adjust to the earlier night the following day.) In Frankfurt, we rented a car, and drove north to spend the first few days with Michael’s grandmother in Cologne. Arriving in time for dinner, we had a warm welcome by not only his grandmother, but also his grandmother’s niece Lena (which apparently makes her a cousin-once-removed to Michael) and his uncle Evgeny, visiting from Berlin. Evgeny prepared several excellent feasts for all of us, and we really enjoyed the family gatherings!

Wednesday morning, we headed out for the second part of our trip: a 3.5 day drive from northern Germany to northern Italy, heading through eastern France and Switzerland for some sight-seeing. We were also excited that Evgeny was able to accompany us, later catching a flight out of Italy.

Our first destination was Hirschland, a very small town in Alsace where there's a decent chance that some of my ancestors on the Kline side immigrated from back in the 1700s. As an avid Francophile, I find this potential French link quite interesting (never mind that Alsace was predominantly German when my Kline ancestors might theoretically have lived here, and that the cultural blending and French linguistic dominance didn't come till after they'd immigrated...)

Later that afternoon, we stopped for a short hike among wooded hills to stretch our legs and visit the medieval castle ruins of the Chateau du Guirbaden, along with some ancient celtic menhirs and dolmens (the path, which includes large informative signs, is known as the “Sentier des demoiselles de pierre”, or the “Path of the Stone Maidens”).

That evening, we stayed at a hotel established within the Mont Sainte-Odile, a monastery first founded around the end of the 7th century.  The monastery sits high above the surrounding plains and has been a popular pilgrimage site over the centuries.

The following day, we toured the Chateau du Haut-Koenigsburg, a medieval castle that was completely reconstructed by the German Emperor Wilhelm II in the early 1900s in an effort to reinforce Germanic rule in Alsace (which had recently been won back by the German Empire after the Franco-Prussian War of 1870-1871). The reconstruction was completed in a remarkably quick eight years, thanks to large amounts of funding and some impressive engineering, like an electric crane, rail tracks leading to a nearby quarry, and unusually-early electric lighting [see A Modern Building Project for more info]. Unfortunately for Wilhelm II and his intention to assert Germanic rule, the castle was confiscated by the French state after WWI, and has now become a French historical monument and popular Alsatian tourist site.

Our last stop in Alsace was the picturesque village of Bergheim, one of the many towns along the Alsatian “Route du vin” or “wine road”.

After driving into Switzerland and dining in the scenic Interlaken, we got to enjoy some beautiful views deep in the Lauterbrunnen valley while undergoing a bit of an adventure finding our Airbnb for the night.

Early the next morning, we toured the Trummelbach falls – a series of glacial-melt roaring waterfalls that has carved itself into the mountain’s edge in a series of tunnels and caves. It’s always impressive to see the power of water and the beautiful rock formations it can create.

Later that day, traveling over the Swiss alps to eventually make our way into Italy, we stopped near the Furka pass to enjoy an afternoon alpine hike, looping below and across the 9,070ft Sidelhorn [see Circular Hike Sidelhorn for a rough description]. The weather was perfect, and the scenery gorgeous: alpine meadows with just-blooming wildflowers, herds of local black-faced sheep, and views of countless snow- and glacier-covered towering peaks. 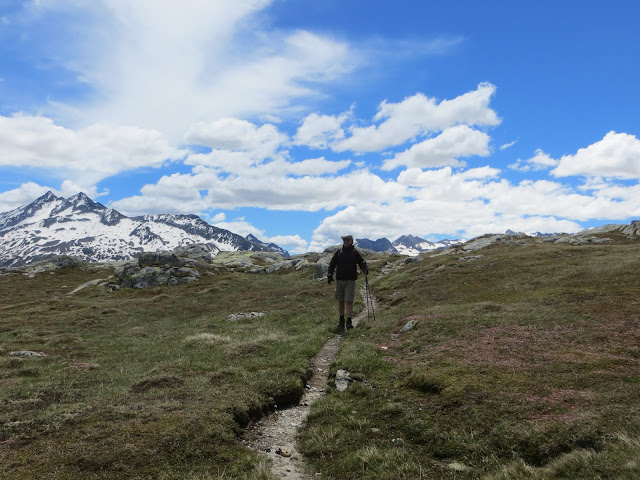 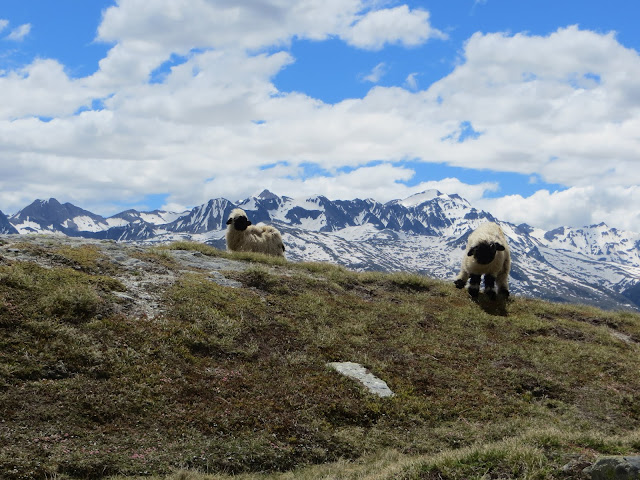 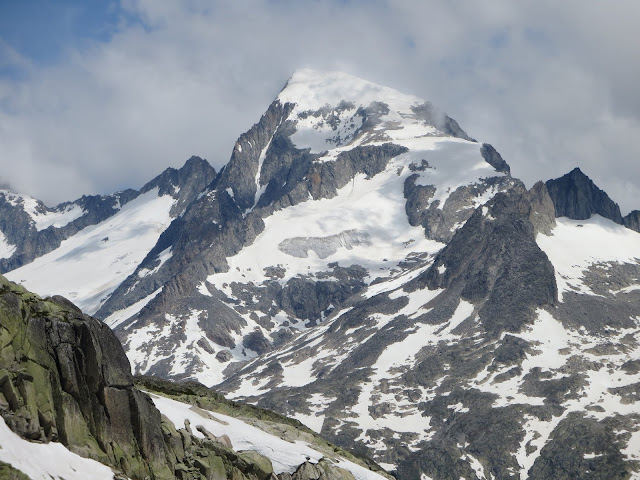 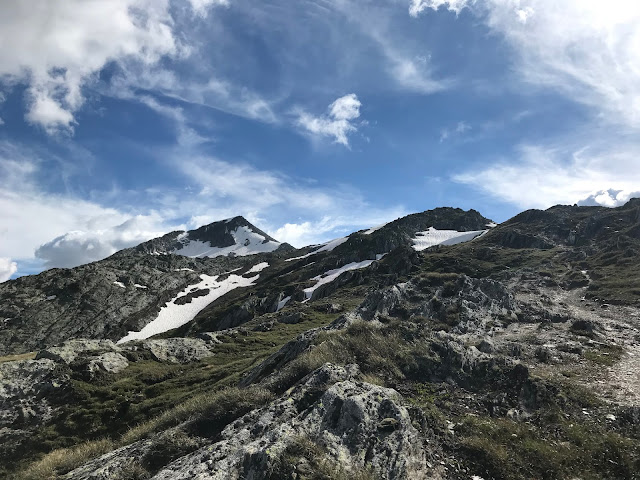 By the time we finished our hike, we were too late to view the Rhone Glacier ice tunnel (maybe some other time), and instead continued towards the very southern tip of Switzerland, on the border with Italy.

The following day, we made our way through Milan traffic towards Vicenza, where we said goodbye to Evgeny, and met up with Erik Tomsen, Michael’s best friend from middle and high school, along with Erik's wife Svenja, and two daughters (Savannah – 9, and Linnea – just under 3). Because of the warm temperatures, we spent the afternoon playing with the girls in a nearby pool.

The next day, Erik – who’s spent the last few years stationed in Vicenza working with GIS for the US Army – took us on a tour of some of the nearby sights:

The medieval walled city of Cittadella


Bassano del Grappa – famous for its covered bridge that has been fiercely fought over and frequently destroyed and rebuilt through the years thanks to its strategic position: 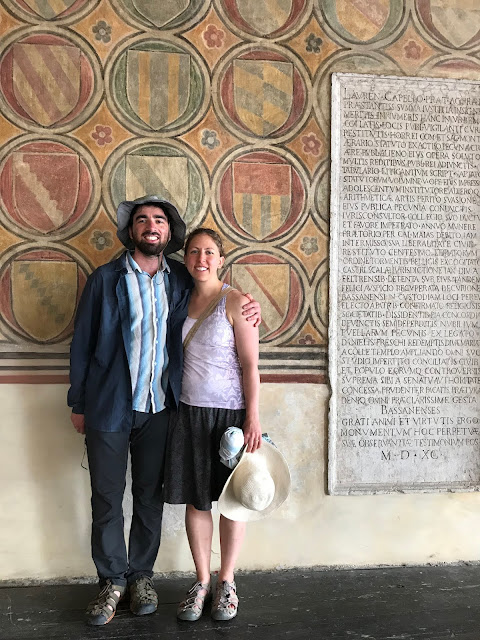 I love these posts and seeing your travels. Did you try to pet the sheep?