Recap of the summer so far. Part I (Downhill skiing; kayaking on Prince William Sound)

Some have expressed interest in the happenings of my Alaskan summer. I shall thus try to do a semi-concise recap of highlights from my summer so far. In the interest of time/space, I shall only describe unusual adventures and other "highlights" that are beyond the commonplace summer activities. (Thus, regular "highlights" such as seeing friends, family, my dogs, etc, will be assumed as self-evident and will not receive special mention).

[For the record, as you come across pictures, click on them for a full-size view]

Probably the first adventurous highlight of my return to Alaska was downhill skiing. Truth be told, the skiing was nothing out of the ordinary: the snow was rather wet, the weather was cloudy, and it was raining at the base of the mountain. What made that skiing special was that it was MAY 20th, and yet there was still a good amount of ski-able snow on the upper half of Alyeska (a mountain within 1.5 hours of my home). I went with my mother and my friend Matt Smith, though it was ominously raining on the way to Alyeska. The rain continued at the bottom of the mountain as well, falling onto green Spring-ish grass. But as we rode the tram, the rain suddenly changed to snow. From the green of spring, we entered into the snowy domain of winter, where Matt and I continued to ski on wet snow for about five hours. It was rather cold, and the wet snow made the tips of my skis continuously get stuck in snow, causing me to face-plant a couple dozen times. Still, Alyeska's "winter on demand" amidst the spring / early summer of the surrounding area was a wondrous experience and sight. 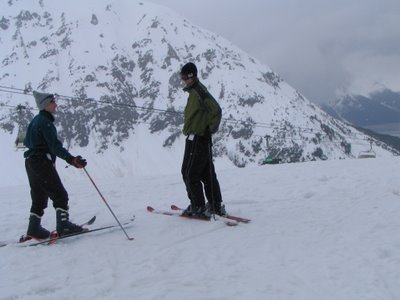 [ For the record, let it be known to the whole wide world that Matt Smith officially jumped off of Eagle Rock, and did so quite successfully. Granted, he took a good 20 minutes to muster the courage to jump, and then a good 2 hours afterwards to get off of a testosterone high, but it was still pretty awesome. Time really seemed to slow down as I watched Matt fall 15-20 feet to the snow-covered ground, only to resume at normal pace as Matt's figure became a cloud of snow that went tumbling another 15-20 feet down the slope. Good job, Matt! I'm glad that you successfully and unscratch-edly -- albeit not very gracefully -- conquered that "Eaglet Pebble" :-D ]

The following weekend I went on another adventure: several days of sea kayaking out on Prince William Sound. We -- my mother and I, my mother's friends Denise and Carol, and one other family -- took a boat from Whittier (2 hours from us) to an even more remote wilderness area about an hour away. We had rented a cabin there for four days, so our first task was to bring all of our gear and food and kayaks over to the cabin from the boat. For the record, for those who are wondering why we hauled our kayaks all the way to the cabin as opposed to leaving them by the shore, let me provide you with a short explanation: twenty-some-foot tides.

Since we started off in the afternoon, it was already evening by the time that we got done bringing over and re-grouping our stuff. Still, the Alaskan summer was kind to us, and it was still perfectly light outside at 8pm. We decided to worry about dinner later, and set out to do a short kayaking voyage not too far from the cabin.

My mother and I rented out a double-kayak, so once we got settled and adjusted properly, we followed Denise and Carol into the water. The water was amazingly calm and wave-less, and the air was likewise very still. It was a great feeling being on the water, especially since the design of a kayak -- unlike that of a canoe -- has the advantage of really making one feel part of the water. It was a beautiful sensation, and the surrounding views were likewise astounding. Both the water and the mountains stretched to seeming infinity. Within that water, we observed a whole group of sea otters swimming and splashing nearby, some of which were brave enough to swim within 50-60 feet away from our kayaks. 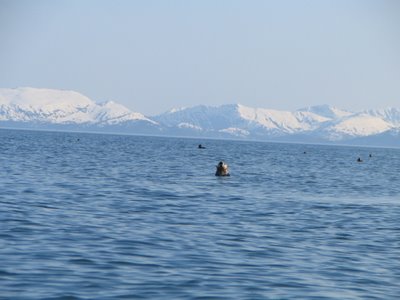 The following day our whole group left the cabin in the morning, and paddled south to an abandoned gold mine and a nearby bay. We reached the gold mine area within an hour and a half, where we left our kayaks and proceeded to climb up the mountain towards the actual gold mine. The mountainside still had plenty of snow on the trail, intermixed with water from the remainder of the melting snow. As for the trail, it was filled with remnants from old machinery and equipment that was abandoned when the gold mine closed in the 1940s. 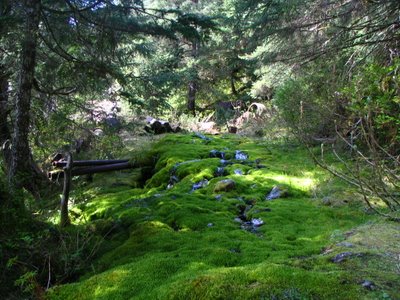 We continued on up the mountain, losing trail for a little bit, but eventually finding it again and coming to the base of the gold mine shaft. The shaft was rather narrow and our headlamps were rather weak, so we only went about 20 yards into the mountain before turning back. Even if the passage were wider, I'm still not sure that I would've wanted to follow it for too long, as I can't imagine anything too exciting happening that deep in the mountain. Also, I'm personally not a big fan of going into abandoned rockfall-prone places into suffocating darkness. Still, it was pretty neat to see and appreciate what the gold mine once looked like, and going up the trail was pretty fun too. It was a nice break from paddling, and also a nice variety from previously seeing the surrounding area exclusively from sea-level. 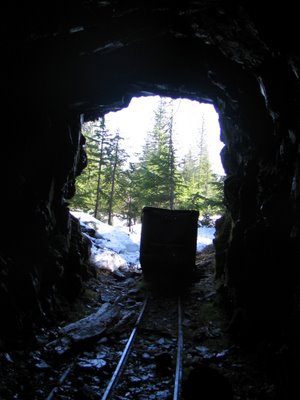 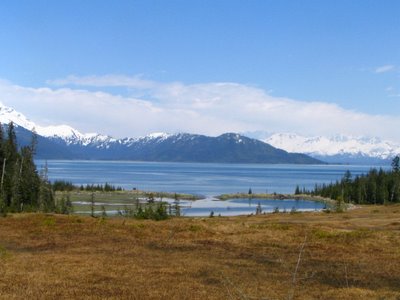 For the remainder of the day we paddled around the goldmine/Hobo Bay area, and eventually headed back to the cabin, where he had dinner over a campfire. When everyone went to sleep, I stayed up a bit longer and witnessed among the most beautiful sunsets that I've ever seen. The sun itself was blocked by the surrounding mountains, but the red and pink hues reflected breathtakingly off of the mountains and the water. There was a feeling of calmness in the air, disturbed only by an occasional splash and the sound of crunching of sea urchins by a distant sea lion. 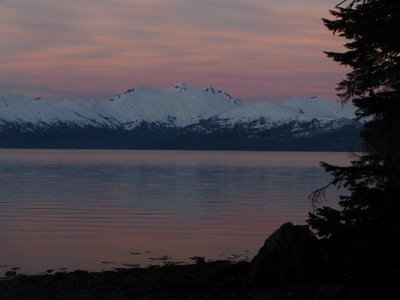 The following morning, leaving some stuff behind in the cabin, but taking our food, sleeping bags, and tents with us, we left for our big overnight trek to a glacier approximately 12 miles away. The trip to the glacier was beautiful. Once again (and for the whole duration of the whole kayaking trip), we were blessed with great weather, and the views were getting better and better with each mile. We got a glimpse of the glacier about a third of the way there, but it wasn't until the end of the 12 miles when we finally saw the glacier (actually, three glaciers side-by-side), in their full magnificence. Right before we came to shore, we had to cross a half-mile channel of small icebergs, which was a ton of fun to maneuver around. We unloaded our stuff, ate a bit, and then my mother and I and the other family went on an exploration trip for another 3 miles (both ways) to get right to the very face of the glacier. 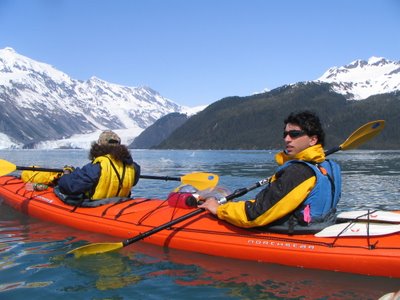 On the way, we saw a phenomenal cascading waterfall that is estimated to be approximately 900 feet (!!!) tall. After we paddled by the first two glaciers, we came to a beach right next to the third glacier, on which sat a dragon-like iceberg. Once we unloaded on the beach, we sat for a while as we waited for pieces of ice to calve off of the glacier. They did so several times during our half-hour stop, and that powerful spectacle was always accompanied by loud blasts and thunder-like noises from the heart of the glacier. 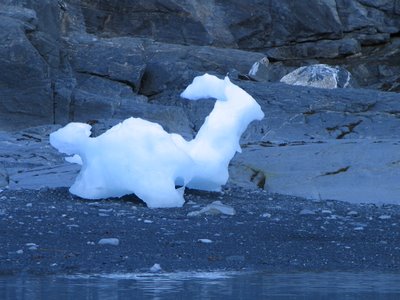 Once we returned from the close-up of glacier to our base camp, we made a fire on the shore that contrasted beautifully with the surrounding whiteness and coldness of the glacier. It was low tide, so many of the previously-floating icebergs were now temporarily stuck on shore. A kid my age from the other family decided to sculpt a bunny from one of the small icebergs, and soon I followed suit. Initially, I was working with a collection of tools from my pocket knife, while he carved his iceberg with a sharp stone. However, once he accidentally chopped off his bunny's entire back, he found a new iceberg and also decided to switch to the conveniences of the civilized world, while I began unitizing a rock for rough work and the tools for finer details. In the end of almost an hour's worth of work, we each had a pretty awesome bunny to which we have grown quite attached. (For the record, I admit that his bunny was better, but it was also his second try). After taking many pictures of our bunnies, we finally decided to set them onto a larger iceberg and let the tide carry them away on a trans-Prince-William-Sound expedition. [ my bunny is on the picture's right ] 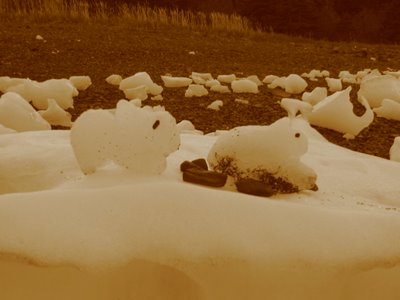 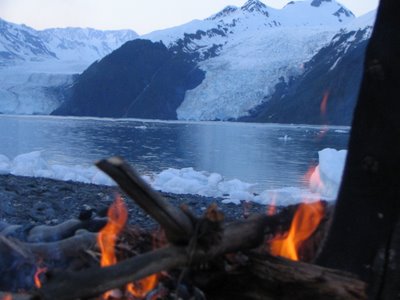 The following day, we leisurely paddled back to the cabin, aided by a friendly tail wind. It was still beautiful, though the scenery seemed bit anti-climactic compared to the monumental size and splendor of the glacier we left behind. Also, since we've already paddled this stretch of ocean on the way to the glacier, there was a little less novelty to the trip. In the evening, the same boat that brought us to the cabin took us back to Whittier, and our kayaking trip -- among of the most beautiful and exhilarating trips that I ever did in Alaska -- was complete. 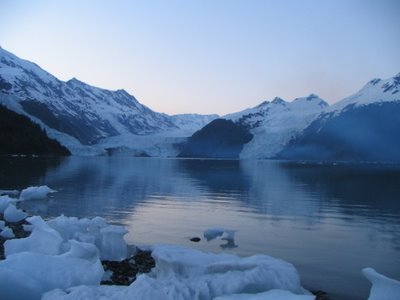 ... Recap of my summer adventures to be continued in Part II.
Check back in a week or so ...

Dude, your camera RAWKS! Those pictures are BEEEE-yutiful!
Am i the first comment on your blog? Rock on man!
The Dragon

unfortunately however, the post is WAAY too long for me to get my summer-oriented mind to concentrate on. Sorry. Could you divide your posts into chapters, perchance??? lol.

how much did that camera cost, again?