To all who are wondering what I've been up to, my life has recently been dedicated to some more outdoorsiness, Frisbee, and guitar-playing. Allow me to elaborate:

To begin with Frisbee: Frisbee has been most excellent! We've consistently been playing 6-7 days/week, and on most days we've had a sizable crowd show up and play. Very rarely have we had to resort to playing on a shortened field. And, speaking of playing on a short field, let me tell you a little story:

As many of you know, I myself am a huge fan of playing on a LONG field. Occasionally, if we had a moderately small group show up to Frisbee and people were in a relatively lazy mood, I've had to overcome some resistance from my teammates with regards to playing on a long field. Once, early on in the summer, someone suggested that we play short-field as "warm-up" before a long-field game. But I rejected even such half-wimpiness with an impromptu response that would have made my physics teachers proud: "Ah, so you want to warm up? Well then, let it be known to all that heat transfer -- i.e.: warming up -- is dependent upon area. Faster warming up requires faster heat transfer, which requires larger area, which requires playing ON A LARGER FIELD. So, long field it is! ... UL-TI-MATE!"

On the same note of Frisbee wittiness, my friend Matt Smith decided to cut his hair one day before Frisbee. He told me about this plan the day before, and I was entirely opposed. I promised to do my best to ridicule him for the entire day if he shall get a haircut. My threats notwithstanding, Matt cut his hair. I fulfilled my side of the bargain as well:

Matt, after a failed attempt to block a throw: "I can't believe it! My hand was a foot of the ground, and Jason still managed to throw the Frisbee below my reach"
Me: "I told you, Matt! If you wouldn't have cut your hair so short, it would have drooped so low that it would act as a curtain against Jason's low throws."

Matt, dropping a disk that was thrown straight to him: "Arg! Dammit!"
Me: "Perhaps, Matt, if you wouldn't have gotten a haircut, the disk would have become entangled in your long hair, and you wouldn't have dropped it."

Matt, blinded by the sun, and losing sight of a Frisbee as it was thrown to him: "I couldn't see that disk AT ALL"
Me: "Whaddayknow, Matt! That hair would have come real handy in front of your eyes when you were looking at the sun, wouldn't it?"

I'm telling you, Matt -- you should have kept your hair long!

In the past three weeks, I've been on a dozen hikes or so, including three hikes just by myself. There was even a time when, for over a week, I consistently went on an outdoorsy adventure every other day, and to Frisbee every day. Two days after my "Unkai" hike (see previous post), I went on another hike in the fog with Ian and Tae, and together we conquered Mt. Gorden Lyon. On the way back, after being genuinely lost in the fog and circling for an hour, we found our way to the abandoned army station a mile from the peak. We explored around for a bit, though unfortunately Ian hurt his leg in the process. For the remaining two miles to the car, Tae and I supported Ian's weight on both sides as he limped along, all the while Ian and I merrily sang "Drunken Lullabies", "Phantom of the Opera", and a number of other songs. 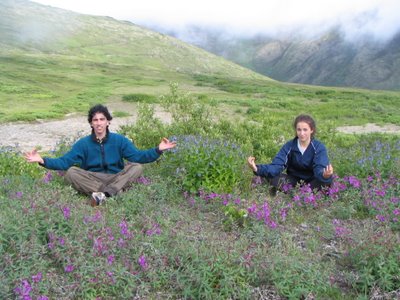 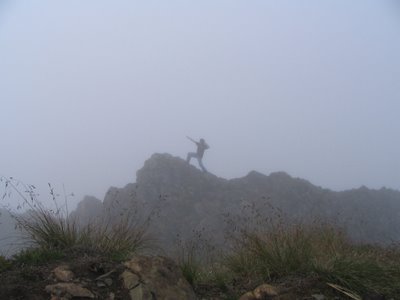 (First picture: Tae and I searching for the Buddha spirit within us. Second picture: Ian Hoffbeck, before he hurt his leg, looking like a fiddler on the roof. Click on the pictures for a larger view)

Two days after that, Tae and I biked in the woods where I live. We spent a significant portion of the time sitting at the waterfall, talking, and observing and listening to the waterfall from a variety of angles. After looking at it from afar, we took a trail to the top of the waterfall and then proceeded to climb down, engulfed by mist and sunshine. It was so beautiful! We biked some more afterwards, and upon coming back home, I played/sang a couple of songs on the guitar for her before we both headed off to Frisbee. 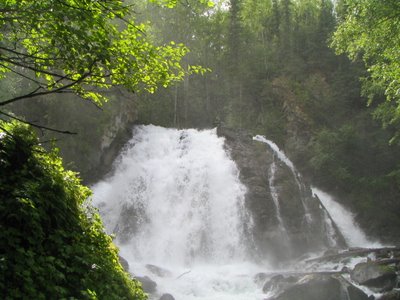 (Click on the picture for a larger view)
Two days later, before Matt Smith left to visit China and a day before he cut his hair, Matt and I and conquered Mt. Magnificent. The views -- especially that of the Eagle river -- were breathtaking. I also conquered a fairly difficult rock cliff along the way. When we got to the top, Matt and I did out best to add some flavor to the bland writings on the summit registry (see images below). 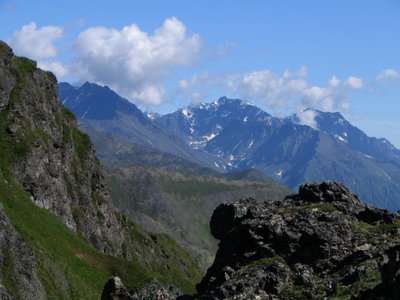 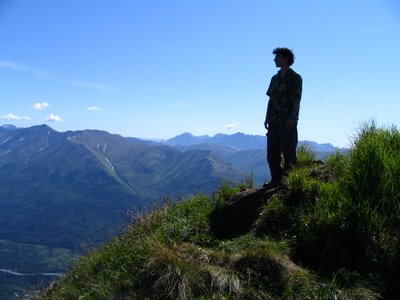 (Note: The communist reference was made by me because of Matt's politically-charged Chequevara t-shirt. Now, try guessing how -- and why -- I derived my "Leahcim Yksvoktalz" alias)

Then, in another two days, I went on a hike in Hatcher Pass with John Dunaway, Ellen, and Thea (not to be confused with Tae). It was foggy and misty and rainy, but the mountains were majestic non-the-less. On such a cloudy day, the dark mountains of Hatcher Pass would have made a perfect setting for Lord of the Rings. We took an eight-mile-trail to Reeds Lakes and to an impressive cascading waterfall. Along the way, John and I jumped between boulders (at which he was a master), and did other fanciful on-the-fly acrobatics (at which John, again, was quite amazing as well). What made jumping the rocks so exciting was the intuitive nature of the jump: the only way to succeed was to trust in oneself, and to simply leap from one rock to the next without focusing in the inherent futility of the jump.

[To those who know either John or I, it is needless to say that after the 16-mile-roundtrip-hike, reinvigorated by some food and four high-calorie chocolate cookies each, John and I went straight to Frisbee and intensely played for another two hours. W00t!] 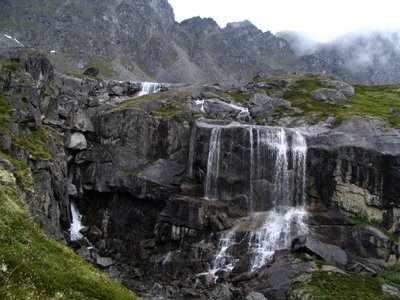 A couple of more days later, I went on two relaxed hikes with just my dogs up Hiland, and then another hike to almost-the-top of Mt. Magnificent with Tae. We found some of my first blueberries-of-the-season along the trail. Then, yesterday, Thea and I went to play in the mudflats of Mirror Lake area. It was a perfectly sunny day, so it was possible to get entirely covered in mud and quickly dry off. After some attempts to find the correct trail to the mudflats, we walked through tall yellow grass ("the Alaskan Savanna") and threw ourselves onto the mud. Slipping and sliding, engaging in mud wars, and experimenting with the weird structural integrity of the mud, we got so enshrouded with mud that we looked more like cavemen than humans from the 21st century. Too bad that, as we crossed the train tracks, no passenger train came by to observe our savage appearance!

* * *
As far as guitar-playing, there is not much I can add in writing. I have perfected my technique a little bit, and have now started fingerpicking the chords (as oppose to simply strumming them). My repertoire now includes a handful of Russian songs, my "Sixteen Games" parody, my re-worked version of "Jenny be Fair" (see one of my first posts), and ten or so Renaissance songs (both fast and slow songs). I am looking forward to playing some of those songs to my friends at Evansville, and also to bringing my guitar to Eagle River Frisbee someday to perform "Sixteen Games".


On that note, (ah! the pun!), farewell to all. Please keep checking my blog, as I have a very amusing post coming up in the next several days.

Most impressive. But honestly, "A couple of more days later"? We would have gotten the point with just "a couple of days later."

You´ve got some gorgeous pictures up-I can´t believe there are green things in the world right now! Its winter in Argentina and although I spent the last week hiking the wilderness, it was a red-brown wilderness with occasional cactus green-brown for spice. And I miss it!!!! Lynn

Haha! I like the thing about Matt cutting his hair. your reasons for him cutting it and dropping the frisbee were quite ligit also. lol The hikes were fun also.
see ya at frisbee
-Tae