The remainder of my first day at Harlaxton was spent exploring the manor house, but tiredness and an overall confused state of mind soon got the best of me. At 10pm (a rather unheard of time by my Alaskan and Evansville standards) I was in bed.
I got up at an even more unheard-of time -- namely, 6am -- and soon went outside into the total darkness. I needed some time alone to reflect upon being in England and to come to terms with Katrina not being here at Harlaxton with me. Cold fresh air greeted me, waking me up from my daze; the moon shone through the light clouds, strengthening my spirit. As I stood outside, watching the manor house rise out of darkness, a certain sense of calm settled over me. The chirping of birds pulsed through the air, and my heart beat along with it. 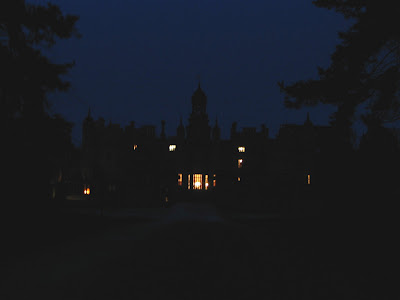 Darkness gave way to light. Slowly each detail of the manor house began to stand out. Foreground and background became distinct. And then the full Harlaxton College stood out in all its splendor. 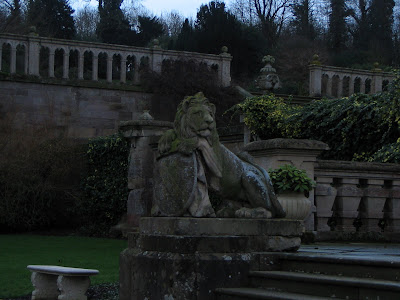 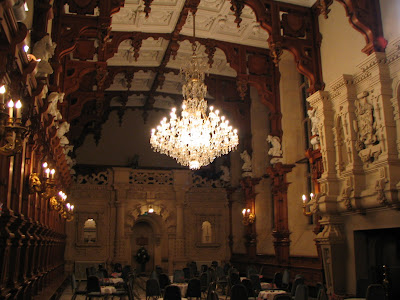 After breakfast, I went outside for a bit to explore the grounds. As I walked around, I stumbled upon a pond with a swan. The pond itself was not particularly spectacular, but the reflection of the swan in it -- along with a view of the adjacent Harlaxton -- made it one of my favorite outside spots on campus already. I also explored the rest of the woods surrounding Harlaxton, climbing a tree and admiring the towers and gardens outside the main building. 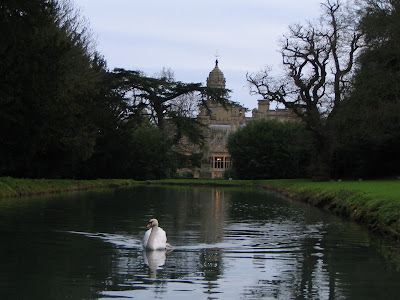 By the way, a note about the picture above: If you click on it for a larger view, you may see a devil-like face on the roof in the middle of the building. I myself noticed it only when I set out to write this blog, and was rather taken aback by it. I showed the picture to Paul, and, courageously cowering behind each other, we decided to go back to the pond to sort out this devil business. We climbed up the hill, but could only see a rather vague resemblance of a face, formed by the round part of the roof and the windows below it contrasting with green stains on the main roof. When Paul and I re-traced my steps to where I took the picture, however, the devil mystically re-emerged. Whatever it is about that particular angle, a menacing devil can definitely be viewed from there.

But to hell with the devil; at the time I still did not know of his continuous presence on campus, and blissfully strolled about the grounds. An hour or two before noon, a formal Convocation and Principal's Address was held in the Long Gallery -- one of the largest and most beautiful rooms in the manor. The convocation ceremony was held very traditionally and ceremoniously; first, a Scottish piper entered the room, filling it with traditional Scottish tunes. He was then followed by a procession of two people holding a British and an American flag, followed by the Harlaxton faculty and staff. A gong was sounded, and we were asked to stand and sing along to "God Save the Queen" and "The Star-Spangled Banner". The principal then began his address. 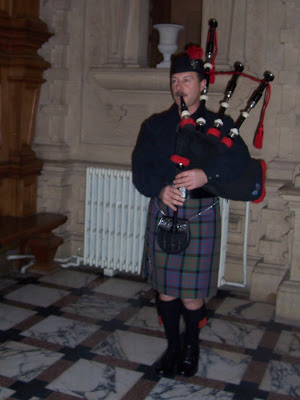 There is no need for me to summarize the principal's speech; let me simply say that it was inspiring, personal, well-spoken, and interesting. Within his speech, however, there was one story which had such an interesting and unusual ending that my blog would not be complete without its inclusion. (It may help to know that this was right after he talked about the need for resilience and hard work in our studies and life):

Queen Anne looked at the cathedral. And then, in the presence of a crowd, she pronounced the cathedral -- the work of Wren's life -- to be "awful", "artificial", and "amusing".

[meaningful pause as we heard this rather shocking and scandalous fact]

Sir Christopher Wren was delighted! In the English of the time, "awful" meant "full of awe", "artificial" meant "artistic", and "amusing" meant "amazing". Queen Anne's scandalous remark was in fact a royal complement!

* * *
After the convocation we had the whole afternoon off, so Paul and I took a Harlaxton shuttle to Grantham for some quick shopping in the rain. In the evening, the whole campus gathered for a Principal's Reception. The Long Gallery, which previously held us for the Convocation, was now re-arranged with tables and expensive dishes and silverware. The piper appeared again with his charming kilt and bag pipe, and piped us into the Long Gallery. We were then randomly assigned to tables, and had a great time eating good food and getting to know our table-mates. At the end of the two-hour dinner (!!!), we were piped out of the Long Gallery, and the Reception was complete.

[BTW, on my usage of "pipe in" and "pipe out": I was actually not the one to come up with this terminology. Our principal was the one who used it in his address, and I thought it was amusing enough -- that is, amazing enough -- to be included in my blog as well]

The Reception concluded the day; the next day was somewhat less exciting, and mostly included some more orientation stuff. The day after that, Monday, was the first day of classes, but that story can wait till a future post.