My departure day in Alaska was almost as exciting as my arrival to Harlaxton Manor itself. In the afternoon, amidst heavy non-stop snowfall, I left to play Ultimate Frisbee with friends. After trying for a while to knock icicles off a tall lamppost with a Frisbee (a surprisingly difficult endeavor), we played one of the most hard-core Frisbee games imaginable, with some extraordinary dives into the fresh foot-deep snow! 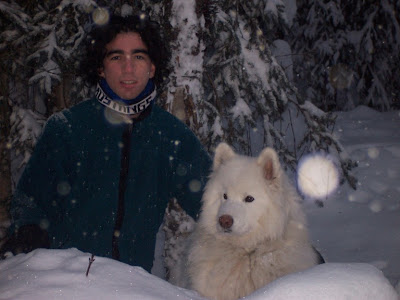 When I returned home two hours later, the power unexpectedly went out. I made a fire, and then my father and I engaged in a dumbfounding activity: waving huge pieces of cardboard in front of the woodstove so as to circulate the warmth through the house (particularly to the bathroom, so that the pipes wouldn't freeze while the electricity was out). By that point it was completely dark in my room (hooray for Alaskan winters), so I spent the next 3 hours packing by light from a headlamp. What a day!

After finishing packing, my parents and I went on a short walk through the moonlit forest by our house, listening to the low rumble of an ice-covered waterfall nearby. And then I was off to England, flying rather uneventfully from Anchorage to Salt Lake City to Boston to London.

London greeted our plane with darkness and fog. City lights -- a vast many of them, stretching into an indistinct horizon -- came in and out of visibility as fog enshrouded the city's skies. On the way to Harlaxton, though, the clouds and fog partially cleared, revealing a scenic road with green valleys and small neat houses scattered about on the fields. Small things everywhere reminded me that I was in England: big yellow license plates, cars traveling on a different side of the road, towers and old buildings reminiscent of a distant past, neat European houses with distinctive chimneys... And there was no snow on the fields -- a pretty solid indication that I was no longer in Alaska.

As we idly chatted about school and upcoming plans, the bus got off of the main way and entered the town of Grantham. In another five minutes, the bus took a left turn and we were at the gateway of Harlaxton.

The gateway of Harlaxton. Just the sound of that phrase sounds monumental. Wide, made of stone, the gateway set the stage for an even more grandiose Manor. The two modern buses that pulled up to it clashed with the solidness and the calm of the Manor's time. A fancy coach drawn by half a dozen horses would have been more appropriate. 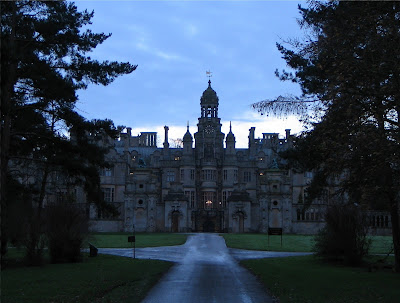 I was now in Harlaxton, ready to study, travel in Europe, and enjoy life; an Irish song, "The Rambling Rover", was on my lips:

"Oh, there are sober men a' plenty,
And drunkards barely twenty;
There are men of over ninety
Who have never yet kissed a girl.
But give me a ramblin' rover,
From Orkney down to Dover:
We will roam the country over
And together we'll face the world!"