Caribbean Holiday Cruise: Half Moon Cay and the Everglades

Truth be told, this day passed fairly uneventfully, especially for Katrina, who had started feeling ill the night before.  For my part, I spent the majority of the day sitting on the open-air deck, watching the horizon, catching up on outlining the previous days’ events, and breathing in the ocean’s salty spray.

In the evening, in celebration of New Year’s Eve, the ship’s showroom featured a performance of various musicals and opera pieces, bringing together the ship’s band, piano, string quartet, dancer girls, and two singers.  For once, I recognized almost all of the pieces:  “Music of the Night”, a couple of Italian songs, “Time to Say Goodbye”, “La Vie en Rose”, a mind-warping psychodelic version of Beethoven’s Fifth (very fast, and with flashing colors and fractals on the screen), and a grand-finale “Ode to Joy”, to the background images of fireworks and with the two dancer girls waving long strands of ribbon into the air.

My morning started with watching the sunrise – what better way to greet the New Year?!  We had made great northward progress during the day at sea, so between that and the time change, it was still somewhat dark when I had stepped out onto the open-air deck.  This sunrise prelude was surprisingly long – already the clouds were tinted with matte pink and orange hues, already the inky purple sky was giving way to a brighter blue, and yet the sun stalled.  Any moment, I felt, the sky and clouds and water were going to burst in a brilliant display of colors; any moment the warm rays would dispel the morning chill.  And, almost exasperatingly, the red disk refused to come out.  And then, literally seconds before the pivotal moment, the door to the deck creaked open, and out emerged Katrina – big eyed, huddled in a coat, but no longer feeling ill.  Having watched the sunset – which finally leapfrogged over the lower clouds, and now vanquished the cold with surprising agility for a newborn red disk – we retreated to our cabin to get ready.  By the time we were out ten minutes later, the sun’s rays were a force to be reckoned with!

Our morning activity was snorkeling.  We had debated whether it was worth paying for snorkeling when we could just do it ourselves, but for those who might venture to Half-Moon Cay someday, let it be known:  it was totally worth it!  A boat took us to a pristine reef off the shore of the island, and we were treated to the best and most colorful snorkeling we’d had all trip, with corals and rocky formations right below the surface.  I also saw a few new varieties of fish, including a black fish with tight “fish lips” and colorful gold-and-silver streaks all over its body, reminiscent of fireworks.  Given the occasion, I immediately dubbed it the “New Year’ fish” (and wished that, like Christopher Columbus, I could make the rest of the world adopt my spur-of-the-moment names). 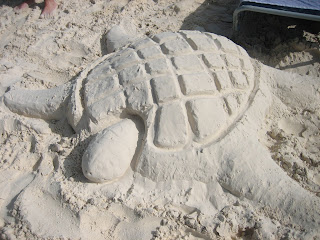 For the remaining four hours on shore, Katrina and I walked about the island, and along the crescent-shaped beach for which the island is named.  Two Holland-America cruise ships shared the island that day, so the beach, while naturally beautiful and graced with unfathomably fine white sand, was crowded.  As for the rest of the island, it – like other Bahamian islands – was almost completely flat, and offered few trails.  As a note to a future visitor of Half-Moon Cay, it turned out that the very far edge of the crescent-shaped beach did have some snorkeling potential, but by the time I discovered it, I had only a few minutes to enjoy it before heading back to the ship.  Still, the barefoot walk along the fine sand was pleasant in its own right, and the morning’s fantastic snorkel made the island worthwhile.  As for the evening, we concluded our New Year’s Day much as we’d started it – by watching a sunset. 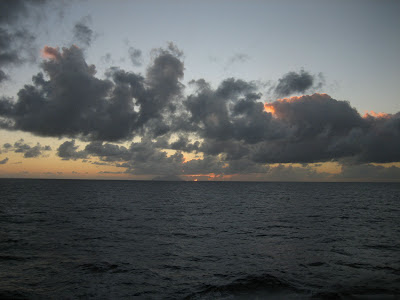 At dawn, we awoke to find the ship nearing port:  our Caribbean voyage had come to an end.  But there was still one last excursion awaiting us back in Florida:  an airboat ride through the Everglades. 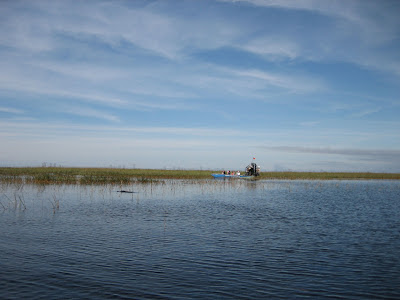 Before the ride, we first had half an hour to tour an exhibit of rescue animals – panthers, jaguars, a fox, a skunk...  The exhibit also featured reptiles, including baby alligators that we got to hold.  The babies were two or three feet long – cute and definitely young, but no longer innocent and harmless hatchlings – and yet their mouths were held shut by nothing more than a piece of tape.  It turns out that while an alligator’s jaw muscles can crush literally anything that’s in their mouth, they have orders of magnitude less power in trying to open their mouth.  So as long as you can prevent the mouth from opening, you’re spared its deathly force as it comes down closed! 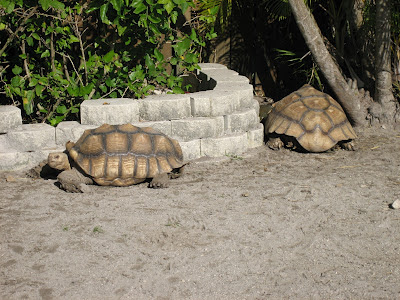 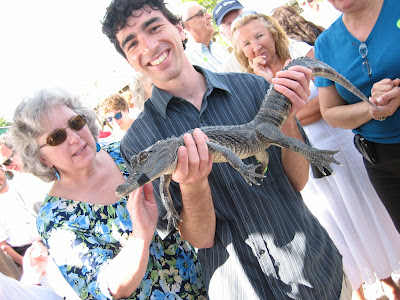 Then came the airboat ride.  I had absolutely no idea what an “airboat” was, though, based on the terrain, I had imagined something like a hovercraft.  I was both right and wrong.  Aesthetically, it was far less cool – just a flat-bottom boat with an airplane propeller on its back.  But functionally, it didn’t matter:  the grass of the everglades bent effortlessly underneath the boat, so that we were able to ride both on water and over fields of waterlogged grass.  The effect was surreal, and somewhat reminiscent of the Knight Bus in Harry Potter; it also felt a little like riding a sled, with the boat keeping its momentum and orientation unlike any normal vessel when going around turns.  It was a very fun ride, and amidst pools of murky water and vast expanses of sawgrass, we did spot a few American Alligators in the wild, which was quite neat.  I should mention, in passing, that amidst the sawgrass (named for its jagged tooth-like edges) were also “bonnet lilies”:  a type of lily indigenous to the area, thus named for the way it adorns an alligator’s head, as the latter comes up from a swim.  And while on the subject of trivia, did you know that alligators can hold their breath underwater for up to 8 hours?! 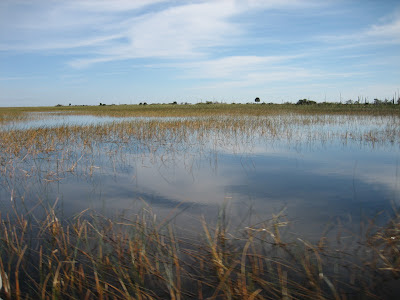 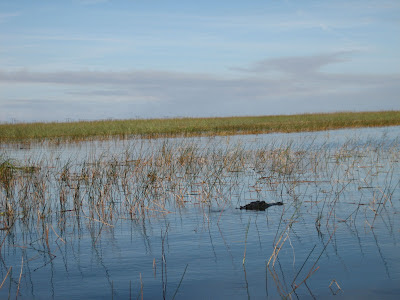 With that final tour, our Caribbean trip ended; now, six months, six blog posts, and eighteen pages later, so has the re-telling of our Caribbean adventures.  Thanks for reading! 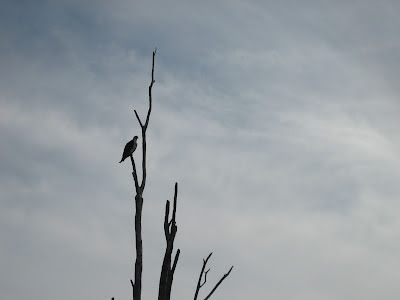 PSA:  Don’t forget to come back for more blog posts (or subscribe via email or RSS, at the top right of the page).   Next on the agenda:  a fun and slightly off-the-wall post about hiking and kayaking in Indiana, to be posted in a week or so.