After the previous two islands, St. Thomas was a return to “normal” civilization.  The shacks were replaced with rich homes; the barely-paved sidewalks were now cobbled; the haphazard lawns turned to carefully-manicured masterpieces.  We were back on United States soil.

Our excursion for the day consisted of SCUBA.  We took a boat trip to a little uninhabited island 20-30 minutes away, where our two dives – each about 40 minutes long – took place.  The dives were semi-guided, in the sense that we had 9 divers per instructor, and were supposed to, not altogether successfully, to stay in a tight pack.  Compared to when we were getting scuba-certified 2 year ago, Kat and I missed the more guided experience of our Kauai diving.  The corals were also less impressive and colorful than in Hawaii, with a lot of the bottom merely covered in sand with occasional rocks.  But some spots were still quite beautiful, and the feeling of transforming from a land-based mammal into a bubble-exuding aquatic creature was as mesmerizing as ever.

Among the highlights was a spotted black-and-white eel, swaying its head tantalizingly from side to side, before dashing from one rocky shelter to the next.  The swaying head was most like that of a curious turtle, except the neck seemed to continue indefinitely, all the way to the tip of the eel’s tail.  We also did see a real turtle, quite a bit smaller than Hawaii’s, but all the more charming for its petite size.  Sadly, upon encountering us, the turtle swam up to the surface, whereas we had just descended to our maximum depth; a pursuit, therefore, would have been not only counter-productive, but also dangerous.  (Question to marine biologist:  how come turtles can avoid decompression sickness – is it because their air comes from the surface, rather than from a pressurized tank, or do they have a different-enough physique to make such feats possible?)  In compensation for staying put and not following the turtle, however, we did see a shiny, streamlined barracuda.

The second dive was to the wreck of a WWII freighter ship, which was later used as a drug-dealer ship, and sank (or was sunk?) in the 1970s.  Truth be told, I was a little hesitant about this dive – why spend precious time underwater to visit a decaying man-made structure, when the whole wide ocean is at our fins?!  As it turned out, though, I should have withheld premature judgment:  it was really impressive to see the extent to which nature had reclaimed the ship over the course of this fairly short time period.  The entire surface was covered in corals and algae, and amidst a fairly dull sandy bottom, the ship was like an oasis of the sea, teaming with fish, spider crabs, and various shelled creatures.  In all honesty, the wreck looked like a sculpted ship-shaped rock (albeit broken into 3 pieces, courtesy of a couple of hurricanes), rather than a foreign object amidst the natural ocean environment.

In the remaining couple of hours, we went to a tiny botanical garden, surrounding a former plantation house.  The garden, filled with local flowers and a few fruit trees (bananas, coconuts), was so small that we walked all the way around it in literally 5 minutes – but as such, it was all the more a perfect place to sit on a bench and simply drink in the scenery.  The garden was situated on a hill, and its top opened up to an impressive view of the Virgin Islands:  not just St. Thomas, but another dozen or so, out of what must be countless others.  Some of the islands were inhabited; others were merely out-of-place rocks in the water.  But looking up from our tall vantage point, it was literally possible to see the curve along which the volcanic islands cropped up out of the ocean, to form the entirety of the Virgin Island chain. 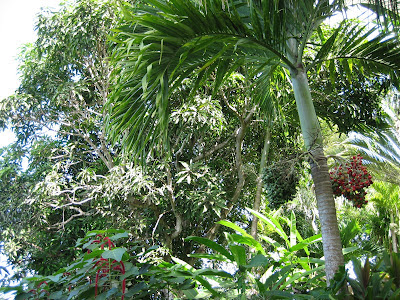 On our taxi rides to and from the garden, we also found out a few interesting factoids about the island.  One is about the way cars drive on the island’s roads:  the driver sits on the left side, just like in the U.S., but he drives on the left side of the road, like in Britain!  While the convention of right-sided or left-sided driving is just a convention – there is technically no “wrong” way, it’s just a judgment call – The U.S. Virgin Islands’ combination is flat out wrong, since drivers going in opposite directions are on the far sides of each other.  Why, then, the inconsistencies?

The steering wheel placement is obvious enough:  the cars are manufactured for the rest of the United States, so the Virgin Islands just have to take what they can get.  What’s more interesting is the origin of the left-hand-side driving.  British influence would be an obvious guess, but there’s one problem:  when the U.S. bought the island in 1917, the automobile was quite rare.  And the U.S. bought the islands from Denmark, not Britain.

A long time, though, the British did own the islands.  And, as it turns out, even in the age of horses and donkeys, it was still important to have order on the roads.  Thus, the British taught their donkeys to walk on the left-hand side of the roads.  When the islands came under Danish rule, the British left, but their donkeys stayed.  The Danes tried to re-train the donkeys, but to no avail:  the stubborn animals, having learned the pattern once, refused to budge.  Moreover, even newly-born donkeys had to be trained to walk on the left, for the sake of remaining consistent with the “old school” donkeys – and the cycle perpetuated itself.  When Denmark sold the islands to the U.S., the donkeys continued to prevail in their set ways.  Even as the island started getting cars, the cars still had to shared the road with the donkeys, and thus were forced to conform to the dumb-ass (get it?!) pattern.  And left-hand-sided driving continues to this day…

The taxi driver also explained why cruise ships only come to the Caribbean in the winter, from October to April.  It’s not that the weather is that much better in the Caribbean during the winter compared to the summer – the temperatures only rise by 5-10 degrees, which is not that big of a deal.  Rather, it’s the rest of the world’s weather (New Zealand excluded) that’s much worse during that time.  So in order to provide passengers with a variety of destination, most cruise companies will do their winter cruises in the Caribbean, then take those ship to Alaska and Europe during the summer.

That evening, when we rejoined the cruise ship, we were treated to a ventriloquist show.  I had not really known what a ventriloquist was, let alone whether I’d enjoy the show, but it was fantastic.  (For the record, a ventriloquist is a comedian who can do different voices and speak with his tongue only, without opening his month – thereby being able to engage in a very realistic conversation with puppets, puppet socks, or even a microphone stand).  We so enjoyed Ronn Lucas’s show, that we want to see it twice, and it was quite interesting to see the subtle but significant difference between the two live performances.  Most of the humor was too involved and situational to describe, but one episode was short and self-contained enough to jot down:

Cowboy puppet:  I know the captain, he and I are buddies.

Ventriloquist:  You don’t know him, we only arrived a few hours ago onto the ship, and you’ve been in the trunk most of that time.

Puppet:  I met him in the shower.  He showed me his tattoo.

Ventriloquist:  I’d seen the captain, he does not have a tattoo.

Puppet:  Yeah he does.  He wears it under his watch.

Ventriloquist:  What?  Why would you wear a tattoo under your watch?

Ventriloquist (after waiting for laughter to calm down):  You are so making this up.  If you met the captain, you’d at least know his name.  What’s his last name?

Puppet:  It is too, he said it over the intercom when the ship was about to sail.  [Imitates deep English voice]:  “Ladies and gentlemen, this is your Captain Speaking”.

[Part VI – the final blog post in the Caribbean series, about Half Moon Cay and the Everglades – will be posted in just a few days.  Don’t want to miss it?  Subscribe to my blog via email (see sidebar, towards the top of the page)]