Of celtic music, school, guitar, stars, camping, hiking, and many a things...

Greetings to all, and happy Ides of October! On this most auspicious of fall days, allow me to finally write about the cheerful happenings of my life at the University of Evansville. Here are just some of the highlights from my past two months:I came back to Evansville on August 21st, after thoroughly enjoying my carefree Alaskan summer of hiking and playing Frisbee. On the last day of my Alaskan Frisbee for the summer, we had an excellent BBQ in the rain (courtesy of the Dunaway brothers), along with puddle-diving and a pagan-like frisbee ritual. As far as puddle-diving goes, we had several weeks of almost solid rain and/or clouds in Eagle River, so our field became covered in a couple inches of water that were quite fun -- albeit cold -- to dive into. As for the pagan Frisbee ritual, it spontaneously emerged after that game when a bunch of us gathered in a circle around the BBQ grill. We didn't have cups for a one-gallon jug of Gatorade, so Amanda drank out of her Frisbee, and then passed it on to the girl next to her. The other assumed that she was also to drink out of it and pass it on to the next person, which started a whole chain of somewhat reluctant but bemused Frisbee handoffs. The reverend care with which the Frisbee was handled -- which from our perspective was just so as to not spill the drink inside of it -- must have looked quite religious from a bystander's viewpoint. And so we call it the "pagan Frisbee ritual" -- both as a reminder of that particular event, and as a reminder of our group identity (contrasted with the "Church Kids" group) :-)

The several days after moving in to my room at Evansville were quite hectic. Beyond seeing my school friends, I was not quite ready to get back to the routine of schoolwork. I was not ready to have a pre-determined schedule, to stop playing Frisbee every day, and to go study in classes as opposed to seeking enlightenment in mountains. Fortunately, my happiness level picked up with the coming of the weekend: first, my friends and I played two good games of Ultimate Frisbee on Friday and Saturday, and then we discovered a wonderful Celtic/Irish band that plays at a coffeehouse every Sunday within minutes of UE. Upon hearing them play, four of us were so inspired that we decided to start a little Renaissance Band of our own: Jason would play the violin, Lierin would play the flute, Paul would play the drum and sing, and I would play the guitar and be the lead singer. We also added a girl we randomly ran into -- Lydia -- to be the female lead. For about three weeks, we practiced together several hours a week in preparation for the UE Talent Show, where we played Jenny Be Fair and Johnny Jump Up. We did not get any of the top three places, but we did get a fair amount of applause from the audience. As for the coffeehouse group, we (in various combinations of "we") have continued to be their loyal fans and to listen to them play every weekend; they, in turn, have supplied us with a remarkable amount of friendly advice, encouragement, and inspiration. 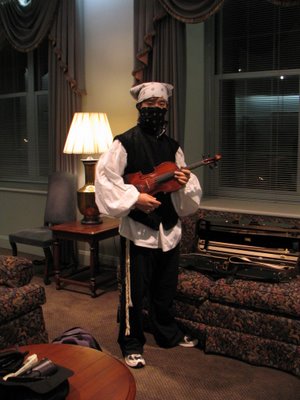 Aside from playing guitar with the Renaissance group, I have also played and sang guitar songs by myself, usually for my most frequent listener, Katrina. I got to know Katrina a little bit at the end of last year, during a trip to Garden of the Gods and during several Frisbee games. This year I started running with her and Paul in the evenings, and through that and guitar-playing (mostly Russian and Renaissance songs) we started spending more time together. In a rather natural progression of playing Frisbee and running together, studying together, going to several concerts, watching stars outside at night (I believe we're the first ones to frequently go to UE's Front Oval with blankets and laptops for music), and me serenading Katrina with Renaissance wooing songs and my own parodied version of the French song "Milord", we realized that we really enjoy each others' company. To continue the natural progression, then, let me simply add that I finally have a girlfriend, and that my most excellent readers should henceforth not be surprised by the frequency of Katrina's name.

Actually, before I go on, let me mention some other brief things in which I was involved one way or another. At the beginning of the semester, Meghan organized a large-scale V-for-Vendetta-themed surprise birthday party for me and Jason, where we had to chase through Powell Hall on a treasure-hunt mission. We both ended up at the closed door of the kitchen, when the door dramatically opened, and we were greeted with the triumphal notes of the 1812 Overture, along with food and cheers from a dozen friends. The most memorable moment, though, was the contrasting image of Meghan with a knife in a miniskirt (see picture below). On another day, Jason and I randomly decided to storm one of the buildings on campus and to put a batman cardboard cutout on one of the projecting lamps. Our mission utterly failed (the shadow of the cutout was unrecognizable due to an inconvenient focal length of the lamp), but pictures from our venture remained. I am wearing a tennis racket cover, tied by a tie, and holding a wooden rubber band gun from the Alaska Renaissance Faire. Jason is wearing a black scarf around his head, and holding a Korean pipe. Why we did this, I can't quite remember... 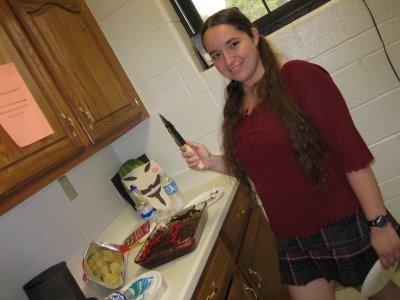 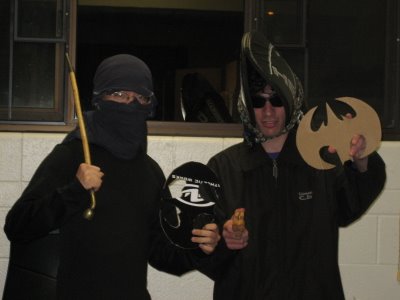 In the middle of September, half of the city suddenly flooded. The culmination of rain over a period of several days finally overpowered the city's drainage system. Many streets were covered in water too deep to drive through. In our part of Evansville, one of the University buildings' basements flooded, and the Front Oval had water over knee-deep. And so, while maintenance workers scrambled to minimize water damage, Katrina, Paul, Jason, and I, along with a whole bunch of people in the Oval, played a game of water-polo-esque Ultimate Frisbee.


I suppose I should also mention schoolwork, however briefly, for it too has been a rather significant part of my life recently. This semester I'm taking three math classes -- Calculus III, Probability, and Combinatorial Mathematics -- as well as Cognitive Psychology, a continuation of Fundamentals of Programming, and a seminar of Plato's Middle Dialogues. The latter two are my most intriguing classes: in Fundamentals of Programming we are using Linux as our operating platform, which I have never used before, and the programming projects themselves have been quite interesting. Last week we were to design a minesweeper-like program, which in itself seems like a relatively simple task, but turned out to be a rather long but rewarding assignment. On some of the errors I was receiving, I felt like Sherlock Holmes, trying to narrow the scope of the problem and to gather information from as many witnesses (variables) as I could; on other errors, I felt like a complete fool, like the one time that I spent TWO HOURS chasing after ONE missing semicolon. At the end of the day, programming is just another "fine and pleasant misery" -- one that is bugging (ha! in both senses of the word) for most of the time, but satisfying during brief glimpses of [often illusory] success.


As for Plato's Middle Dialogues, the class has been fascinating. For one, the dialogues themselves are quite entertaining to read, and Plato's breadth of topics is remarkable. But even more so, I'm continuously amazed at how applicable Plato's themes are to personal affairs and current world affairs. The connection becomes even clearer when interpreted and explained by Dr. Beavers (the same teacher that I had for Cognitive Science). The small-group seminar-like structure of the class makes each of us feel like we're part of a philosophical breakthrough, though the real breakthrough, of course, must have occurred within Plato's mind over 2,000 years ago.

Switching back from academics, last weekend was Fall Break, so Katrina and I, as well as my friends Jeremy and his girlfriend Amanda, went on a three-day camping trip to New Harmony State Park (about an hour away from Evansville). The leaves had just begun to change colors, so there was a visible difference in the leaves between our first and last days at New Harmony. We spent the three days relaxing, sitting next to the campfire, and going on several short hikes in the area. Among the memorable experiences were throwing sticks into an algae lake, exploring a dried-out river valley, and climbing and swinging on vines and trees. The algae lake was unique because of how it "swallowed" the sticks that were thrown into it: first the stick would make a splash that would push the algae away to reveal dark water, but within seconds the sinister algae forces would close in on the stick and would soon leave no trace of it. The river valley did not seem quite as supernatural, but it had plenty of fallen logs that were fun to cross from one side to the other. As for the vines and climbable trees, there was an abundance of each, and I climbed and swung from many (see pictures below). 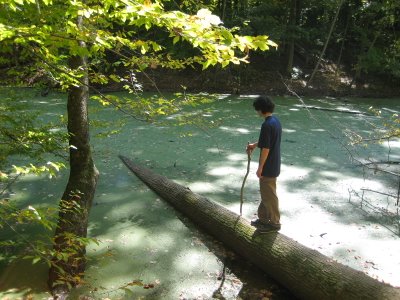 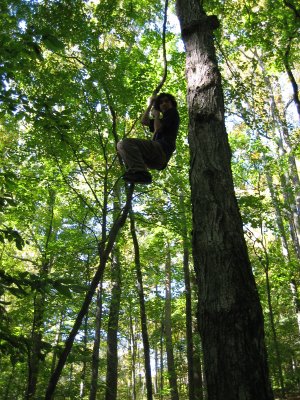 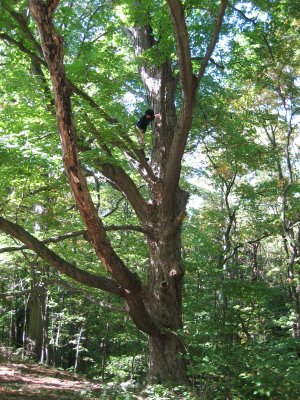 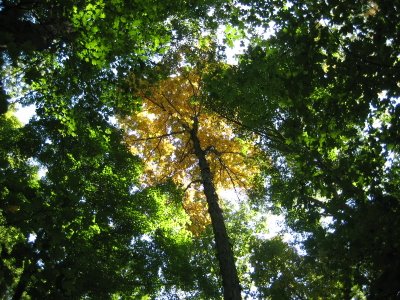 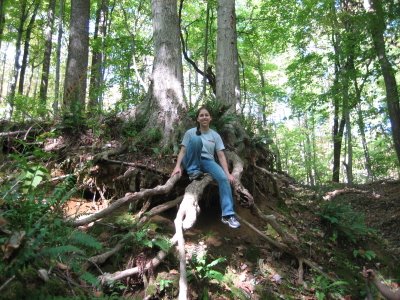 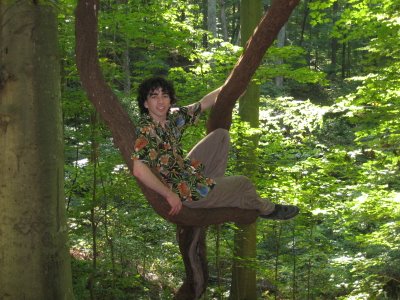 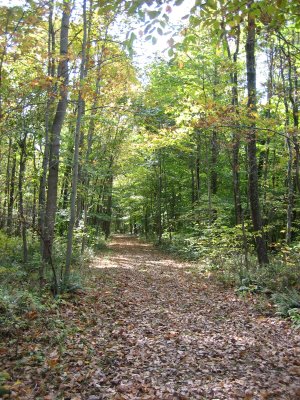 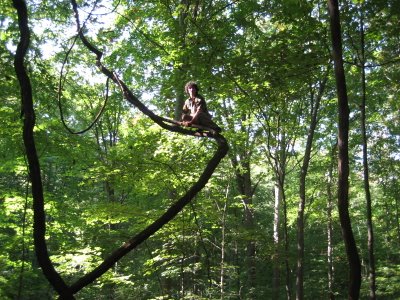 That is all of my adventures for now. Please keep checking back, as I will attempt to post more frequently from now on. Feel free to post comments and/or reply to me via other means, and if you have a blog or a mass-emailing list of your own, please let me know.

hey...what happened to the surprise party for you and jason? that was a highlight of the first few weeks ;)

If it was left out cause you didn't have any picts, I've got plenty ^_^ including the V watermelon ;) Just let me know ;)

The world's a small place... a friend of mine at Butler has a friend who knows Katrina and told her recently that Katrina is with some guy from Alaska. What's even weirder is that I would ever know that my friend's friend knows who you are. I guess that's what happens when you are from Alaska- people talk about you a little too much.