Allow me, for a moment, to stray from the usual format of stories, and to start my short tale with the climax of the story. See the picture below? (You may want to click on it to for a larger view). This is Garden of the Gods, and the peculiar tall rock on the right is known as the Devil's Smokestack. Now, see the small figure spanning the 30-foot-drop gap between the rocks? Yeah, that’s me. Fast forward another 10 minutes, and listen closely to the following modified refrain from "Johnny Jump Up": 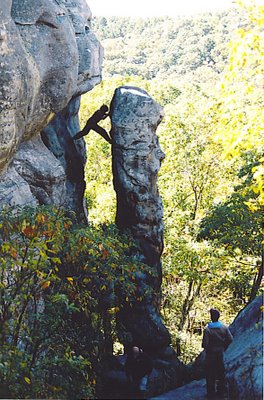 Yes, this post is an amusing tale of what NOT to do at Garden of the Gods. Consider it a cautionary tale with [fortunately] a happy end. And if I ever go rock-climbing with you, please remind me of the chorus above.


On with the story:

Two weeks ago, in mid-October, the Honors Program and the Biology Science Club organized a trip to Garden of the Gods. I've been there before last year in the spring, but this was my first time to see Garden of the Gods in the fall. It was, indeed, beautiful. Flat ground suddenly gave way to rolling hills, out of which unusual rock formations emerged. The sky was blue; the leaves were just starting to change colors. Even the rocks seemed alive on such a day. 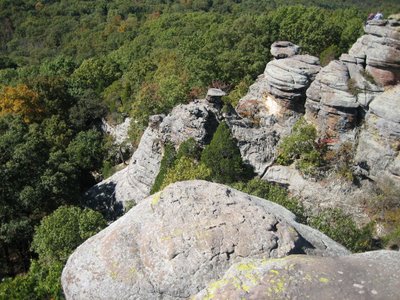 Katrina and I wandered off from the big group, agreeing to meet with them for lunch. We then proceeded to explore the rocks, not by following an overly-crowded and un-poetic trail, but by actually being on the rocks, stepping over small crevasses, crawling past overhanging rocks, and really being one with nature. It was nothing too dangerous -- just exploratory. Among our greatest finds was soft moss growing in-between the rocks, a beautiful tree, and a large hole in a rock that gave rise to the contour of a bunny. 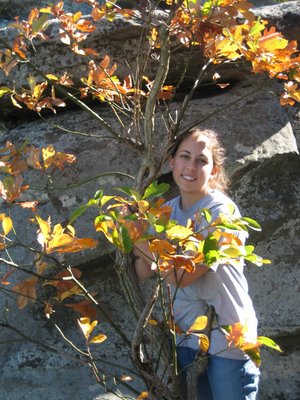 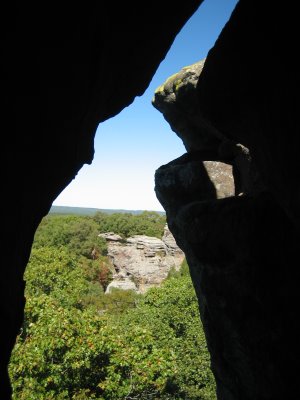 As we made our way across the main part of Garden of the Gods (which, despite the grandeur of the name, is relatively small), we came across a rock that proudly bore the name of "Devil's Smokestack". It was a tall narrow rock with vertical walls, and one that I wouldn't have considered climbing if it weren't next to another near-vertical rock. I decided to climb up just a little bit by wedging my legs in-between the rocks for friction, and pulling myself up with my arms. Katrina remained below, not quite approving of what I was doing, but not quite disapproving either. With Katrina also remained most of my reasoning ability, for I continued to forge on until roughly the point where you see me in the picture. I was stopped there for about 10 minutes, trying to figure out how to continue, for the distance between the rocks was growing too large for my legs. It was roughly at this dramatic moment that Katrina's cell phone in my pocket rang.

More by convention than anything else (I already mentioned that my reasoning ability remained with Katrina below), I let go of one of my hands to reach into my pocket. The pocket refused to open easily, so I let go of the other hand too. "Hello? Oh, hi, Bo. Oh, yes, we're fine, we'll join you guys in about 30 minutes. Picnic Tables? OK, bye". Bo was a student in charge of the whole trip, who, just an hour earlier, gave us a short spiel on not climbing anything over 5ft tall. How I wished he could see me there, as I casually took his phone call straddling a height of 30 feet above ground!

Meanwhile, my legs were getting a little tired from standing still, while the top of the Smokestack seemed even more alluring and within reach. The handholds on the Smokestack were not great, but in letting go with my legs and putting all of my weight on my hands, I managed to find decent grip. Several seconds later I was at the top. For the moment, the whole world was mine -- I had conquered the Devil's Smokestack.

But as I stood there on top, exhilarated by my little success, I forgot that the Devil's a tricky bastard. The Devil didn't forget that, though. As I began to climb down, a realization dawned on me: that the handholds that worked when I had all of my weight on them were useless on the way down. And, without those handholds, there was no way for me to push my leg off to the adjacent rock. And, without the adjacent rock, there was no way for me to climb down. In other words, I had no idea how to get down.

I tried reasoning through this again. Surely there's no way I could have been so dumb! I tried once more. No luck. I even tried pulling myself up to the adjacent rock from the top, hoping to find my way across from there, but it was too steep. No doubt now -- I was stuck!

I tried, again, to climb down where I came from. From where Katrina stood, she could see a good placement for my foot if only I could reach down another foot further. But I couldn't. I simply didn't have the grip, and the reality of the 30-some feet below me made me keenly aware of the importance of not slipping. Meanwhile, a crowd of 40 or 50 gawking bystanders have gathered some distance away from the rock. If only one of them would have come closer, climbed part of the way up, and physically moved my leg to the other side, I would have been fine. It would have been an easy climb, too, for the person would only have to climb as far as I did before I leaped over to the other side. But without that help, I wasn't willing to let go of the rock and push myself off to the other side, not certain whether the other side would hold me. Meanwhile, the zealous crowd had called a Park Ranger to rescue me. Once again came the embarrassing realization of "I'm stuck".

I think it was the threat of the Park Ranger that finally motivated me into action. I wasn't quite sure what that encounter would entail, but I didn't envision anything pretty. Directed and encouraged once again by Katrina (who, throughout the whole ordeal, was surprisingly calm and accepting of the outcomes of my stupidity), I let go of part of my grip and, held by little more than faith alone, moved my leg to the indicated foothold. For just long enough, faith overpowered gravity. In another ten seconds I was on the ground, hugging Katrina, and in another ten seconds we were both on a mad dash away from any ranger who might come, heading to the picnic tables where Bo was awaiting us. 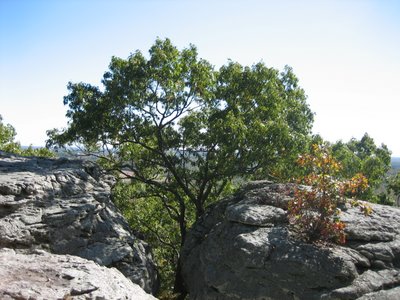 Will I remember my lesson? I'm afraid not, though perhaps Katrina will remind me. Today, about two weeks after my adventure, Katrina and I were studying outside in the Front Oval. A squirrel came next to us, prancing around on the grass. The sun was almost setting, and the squirrel's magnificent bushy tail glimmered with every jolting movement. Looking at it, Katrina daydreamed of how she'd willingly become a squirrel for an hour just for the tail. How she'd wave her brilliant tail through the air, showing all the students in the Oval what a beautiful and radiant tail it was. Two trees with touching branches swayed in the wind, and so I interrupted Katrina's flow of imagery (no Homer would compare) to point out how I'd become a squirrel just to jump from tree to tree. Katrina, in all seriousness, considered it for moment, but decided otherwise: "No, you see, that scares me. I'd rather sit on the ground and play with my tail".

Haha, what a great story! ^_^ I'm glad you made it down without the park ranger's help. That probably would have been embarrassing. The photo is hilarious too.

Hey man, been there and the story didn't end pretty. This was back in 1991. I recall being stuck just as you were. I can 100% confirm that once you are up there, you cannot come back down unless you cross over. After watching my cousin cross about 5 times (he was very good at climbing) we thought it was enough and I could make it if I get boosted up to where by brother was on the other side. My cousin tried to boost me across and I missed my brothers hand by a good 1.5 foot and down I went. So sorry you had to experence that. I didnt' have the onlookers but it was scary enough. I was in many tight situations as a kid, so I never thought I would actually fall, but I did. I'm not so risky ever since :) Excellent Dr in Evansville saved my life.
Thanks for your post

@Anonymous, thanks for your comment! Glad you lived to tell the tale. I once read that we're all born with two jars: a Luck jar, filled with N number of marbles, and an empty Experience jar. Every time you get lucky, you use up one of the luck jar marbles, and so you better be wise enough to transfer it to the experience jar rather than having it get wasted. You also don't know how many marbles remain in your luck jar (all you know is that it's a diminishing number), and so over time -- to give yourself more safety margin -- you've got to start relying more and more on the experience jar.

I'd like to think that I'm learning that lesson...