A short story of a fragmented reality

Allow me to indulge your patience for a short -- and maybe somewhat mystical -- personal story of a fragmented reality:

On one of the many snowy days during Christmas Break, I decided to go to the waterfall in our subdivision. Instead of going on a round-about trail, I headed to the waterfall through woods on our friends' property. The snow there was about a foot deep, untouched and fresh and pure, having only been on the ground for two days. After looking at the waterfall from a distance for a while, I decided to walk to its top.

It was amazingly pretty there. From where I stood, I could not see the "fall" of the waterfall, but instead I saw the water float past me, glide past several chunks of ice, and then disappear into oblivion. Countless birch trees and spruce trees stood above the water, each branch covered with several inches of snow. And the snowflakes kept falling and falling...

After a while, I decided to climb to a little rock ledge right above the waterfall. I've been there in the summer once or twice, though I can't say I ever delighted in staying there too long: while it is pretty to stand over a waterfall, the rock ledge has another huge rock wall leaning right above it, and it's a rather eerie feeling to be thus wedged between a leaning behemoth rock and a great and merciless distance to the bottom of the waterfall. Nonetheless, the rock ledge, as always, looked very appealing from a distance, so I climbed it today as well.

And, as always, having stood there for hardly ten seconds, I wanted out. The path back from the rock ledge to the "mainland" was only about five yards or so, but there was one yard where the path got very narrow. In the summer I could always clearly see where I can step and where I shouldn't, but today, under a foot of snow, it was impossible to tell. To play it safe, I grabbed onto a tree that was by the narrow part of the path. That way, if I slipped (and I expected I would), I'd have the tree to hang on to in order to pull myself back up to the trail.

Just as expected, I slipped, but the tree held me well. Seeing me slip, my dog Dunai came up to see what the commotion was about, and stood on the opposite (path) side of the tree. I placed my feet firmly on a piece of ice and pushed, putting my weight on my arms and wrapping them around the tree. The top of the tree leaned slightly towards me due to the extra weight at its side. I pulled up with my arms. Nothing in particular happened. I placed my right leg on the path. Nothing continued to happen. And then Reality disappeared.

That's right: Reality simply and easily slipped out of existence, much like Reality slipped away piece by piece in the Eternal Sunshine and the Spotless Mind. At one moment my dog was in front of me and the waterfall rumbled below; then part of Reality tumbled, weaved in and out of existence, and then everything -- my dog, the waterfall, the trees, the sky -- became enshrouded with an impermeable white wall. Nothing. A glitch in the Matrix. Even the sound of the waterfall stopped, replaced with a rustling sort of roar.

I clung onto the tree. It was my anchor, the only thing rooted back to a Reality which I could no longer sense. A little island, hanging in mid-air. My island.

Reality was back up and running in several seconds. The Matrix had reset itself. The sky was the same shade of cloudy gray, the water continued to rush past the same chunks of ice, and even the chirping of birds seemed uninterrupted. The glitch didn't go unnoticed, though. My dog had re-positioned himself: he was now facing away from me and was another two or three feet away. And the tree -- my anchor, my island, my clasp to this fickle reality -- was the only tree that stood snowless among the sea of white. 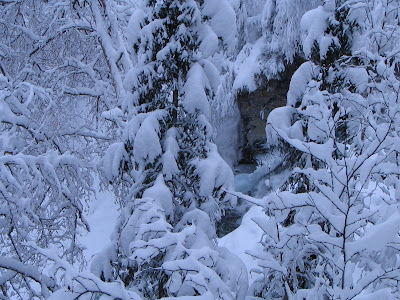