Antigua was smaller, less mountainous, and less lush than Dominica.  Curiously, whereas Dominica boasted of 365 rivers, Antigua rallied with 365 beaches – the numbers, again, seemingly too perfect and too evenly matched to be true.  All the same, Antigua’s coastline was indeed vast, and our shore excursion took us to a remote part of the island’s coastline, composed of countless miniature islands.  These mini-islands – some merely a few hundred feet in diameter, and rising just barely above the water – were surrounded by mangroves, to the point that it was unclear which came first.  Did the mangroves form around the existing low-lying land mass, or did the mangrove’s root systems, latched onto the shallow surface of the water, trap enough sand that it eventually formed a budding island within its perimeter? 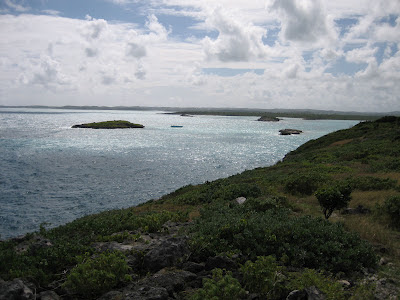 Our excursion began with a scenic boat ride amidst the islands, till we came to a spot where the tour company’s kayaks were stashed.  Once we were all aboard our respective sit-on-top kayaks, our excellent tour guide led us along the coast line, and told us many fascinating stories about Antigua’s ecology.  The man groves, apparently, are essential for preventing coastal erosion and for harboring fish; they are also remarkably efficient at filtering out salt water. 90% of the salt is filtered out at the roots, and the remainder is processed by the leaves.  Once a leaf has absorbed a certain amount of salt over its lifetime, it turns yellow and drops off; it is then eaten by the fish that live in the shelter of the mangrove roots, returning nutrients to the ecosystem.

As a teenager, at one of nearby islands, our tour guide witnessed two rare sights related to sea turtles.  The first was when he and his family chanced upon a mother turtle giving birth.  After digging a sufficiently deep and wide hole, the turtle labored in a trance for 3 hours, producing 150 gold-sized eggs.  Through all this time, her eyes were streaming with tears, giving a very human feel to the proceedings (the biological function of the tears is to prevent sand from getting into the entranced-mother’s eyes).  Once the eggs were all safely deposited into a hole, the mother buried the eggs and meticulously covered up any traces of the site, plopping on it over and over again until the ground looked perfectly level and indistinguishable from the surrounding sand.

Sixty days later, at nighttime (animals instinctively tend to hatch under cover of nightfall, which they can sense by the temperature fluctuation of the sand), the guide and his family returned to the island.  They waited a few hours, and right as they were about to leave, the father pressed his hand to the sand and felt movement; within moments, the sand visibly stirred, and 150 little turtles came marching out of the ground.  Once out in the open, they swarmed haphazardly, unsure where to go, unable to see the reflection of the moon in the water on this cloudy night. But then the guide’s family put their flashlights together into one collective beam and pointed it at the shore.  Something in the little creatures’ minds clicked, and they marched, single file, into the water and out of sight.

After an hour of kayaking and listening to the guide’s stories, we took another boat ride to Bird Island.  Granted, most of the birds come to the island at night, but our guide told us of one species of bird that is a poor fishermen but an excellent pirate.  The bird will soar up in the air, far above the water; but when it sees a smaller bird get away with a fish, it will drop out of the sky like a rock, screeching a battle cry.  Hampered by the extra bulk and weight of a struggling fish, the smaller bird invariably will release its prey and fly for dear life, while the pirate will swoop down to pick up the booty, often in mid-air, or right as the frazzled fish strikes the surface of the water. 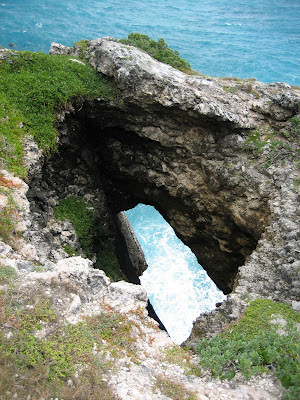 At Bird Island, the plan was to snorkel, but the large waves that were rolling onto the island made the visibility very poor.  The water was so sandy that even the coral reefs, only 5-10 feet below the surface, were enshrouded in a brownish daze; as for fish, they had long escaped into their little hiding holes.  On the boat ride back, however, we saw a few pelicans with their ridiculously huge beaks, and back at the tour company’s headquarters we were greeted with tropical punch, fresh banana bread, and a friendly parrot to keep us company.  It was a fun tour. 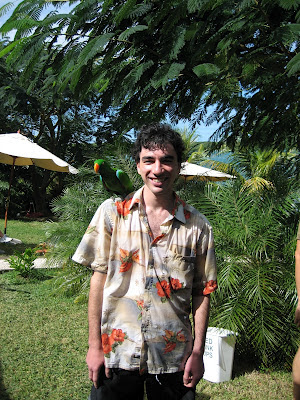 We still had two and a half hours when we got back to the cruise ship, so we took a cab to Turner Beach, which the guide had recommended for snorkeling.  Unfortunately, the same waves that beat against Bird Island pursued us here, too, so we gave up on snorkeling and merely swam into the completely beige-colored sea, not even bothering to dip our heads under water.  But as the water swelled and fell around us, we glimpsed cascades of water roll down the nearby rocky shore, and also witnessed pelicans diving into the water, somehow discerning fish though all that murk.  I just hoped that the pelicans – and, sharks, for that matter – would not mistake our disembodied limbs for food!

PS:  Happily, no shark jumped out of the water and bit off my arms.  As testament to it, see Part V – about St. Thomas.